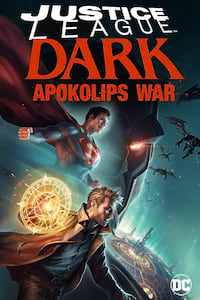 Following two failed attempts at invading Earth which were foiled by the Justice League, Darkseid continues conquering other worlds. The League, joined by new members Zatanna and John Constantine, plan to take Darkseid's war to Apokolips while the Teen Titans remain on Earth as a defense force. Unbeknownst to them, Darkseid sees through their plans via Cyborg due to the latter's connection with a Mother Box. Upon arrival, the League are attacked by Paradooms; aliens fused from the DNA of Parademons, and Doomsday, and become enslaved to Darkseid with Superman being stripped of his powers, Batman being mind controlled under the Mobius Chair, Flash and Cyborg being used as power sources for Apokolips, and Wonder Woman, Martian Manhunter, Mera, and Hawkman being converted to mechanical Furies. Constantine manages to escape Apokolips after witnessing Zatanna's death at the hands of Paradooms. Back on Earth, the Titans are slaughtered by Parademons with Raven and Damian Wayne being the only remaining Titans; Starfire, like Wonder Woman, is resurrected as a mechanical fury.[cont.]