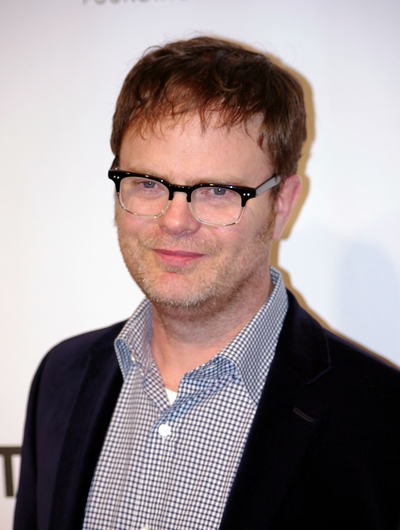 Rainn Dietrich Wilson (born January 20, 1966) is an American actor who is well known for his Emmy-nominated role as the egomaniacal Dwight Schrute on the American version of the television comedy The Office. He has also directed three episodes of The Office: the sixth season's "The Cover-Up", the seventh season's "Classy Christmas", and the eighth season's "Get the Girl". He also voiced the alien villain, Gallaxhar in Monsters vs. Aliens.

Wilson was born in Seattle, Washington, the son of Shay Cooper, a yoga teacher and actress, and Robert G. Wilson, a novel writer, artist, and business consultant who wrote the science fiction novel Tentacles of Dawn. (Rainn showed the book and read from it on Jimmy Kimmel Live! March 22, 2011.) Wilson attended Central Middle School and Shorecrest High School in Shoreline, Washington, where he played the clarinet and bassoon in the band. He transferred to and graduated from New Trier High School after his family moved to Winnetka, Illinois to serve at the Bahá'í National Center. Wilson has a theatre background from Tufts University and the University of Washington, and has taught acting classes. He holds an MFA from New York University's Graduate Acting Program at the Tisch School of the Arts and was a member of The Acting Company. While acting in theatrical productions in New York, he drove a moving van to make ends meet.

In addition to his starring role on The Office, Wilson appeared as the eccentric Arthur Martin—the intern at Fisher & Diaz Funeral Home—on HBO's Six Feet Under. He has also appeared in Law & Order: Special Victims Unit, CSI, and Entourage, in the last portraying a sleazy entertainment journalist based on Harry Knowles of Ain't It Cool News.

Wilson is married to writer Holiday Reinhorn. They met in an acting class in college and married on the Kalama River in Washington. The couple have a son, Walter Mckenzie, born in 2004, and they currently reside in Agoura Hills, California. They have three pit bulls, Oona, Barry, and Pilot. He and his family are members of the Baha'i Faith.