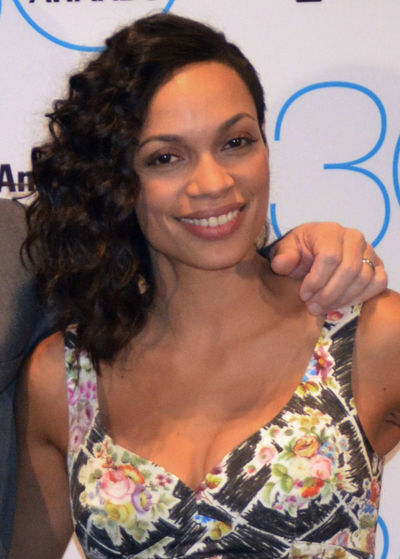 For her role in Rent (2005), Dawson won the Satellite Award for Best Supporting Actress – Motion Picture; for her role in Top Five (2014), she was nominated for the Critics' Choice Movie Award for Best Actress in a Comedy. Dawson currently portrays Claire Temple in the Marvel Cinematic Universe, recently in two of the Marvel Studios/Netflix series, Daredevil and Jessica Jones.

Dawson was born in New York City. Her mother, Isabel Celeste, is a writer and singer who is of Puerto Rican and Cuban ancestry. Isabel was sixteen years old when Rosario was born; she never married Rosario's biological father, Patrick C. Harris. When Rosario was one year old, her mother married Greg Dawson, a construction worker, who "loved and raised Rosario as his own daughter". Dawson stated, "He's always been my dad". Dawson has a half-brother, Clay, who is four years younger. Isabel and Greg divorced in 2001. Dawson lived in Garland, Texas for a year and went to Garland High School.

At age 21, Isabel moved the family into an abandoned building, a squat on the Lower East Side of Manhattan, where she and her husband renovated an apartment and installed the plumbing and electrical wiring for the building, creating affordable housing where Rosario and Clay would grow up. Dawson has cited this part of her history when explaining how she learned that, "If you wanted something better, you had to do it all yourself."

As a child, Dawson made a brief appearance on Sesame Street. At the age of 15, she was subsequently discovered on her front porch step by photographer Larry Clark and Harmony Korine, where Korine lauded her as being perfect for a part he had written in his screenplay that would become the controversial 1995 film Kids. She went on to star in varied roles, ranging from independent films to big budget blockbusters including Rent, He Got Game, and Men in Black II.

In 1999, Dawson teamed up with Prince for the re-release of his 1980s hit "1999". The new remixed version featured the actress in an introductory voice over, offering commentary on the state of the world in the year before the new millennium. The same year, she appeared in The Chemical Brothers' video for the song "Out of Control" from the album Surrender. She is also featured on the track "She Lives In My Lap" from the second disc of the OutKast album Speakerboxxx/The Love Below, in which she speaks the intro and a brief interlude towards the end. In 2001, she appeared in the movie, Josie and the Pussycats.

Dawson starred as Naturelle Rivera, the love interest of a convicted drug dealer played by Edward Norton, in the 2002 Spike Lee film drama, 25th Hour. In the 2004 Oliver Stone film Alexander, she played the bride of Alexander the Great. In the autumn of 2005, Dawson appeared on stage as Julia in the Public Theater's Shakespeare in the Park" revival of Two Gentlemen of Verona. It was her first appearance on stage.

In the film adaptation of the popular musical Rent in 2005, she played the exotic dancer Mimi Marquez, replacing Daphne Rubin-Vega, who was pregnant and unable to play the part. She also appeared in the adaptation of the graphic novel Sin City, co-directed by Robert Rodriguez and Frank Miller, portraying Gail, a prostitute-dominatrix. Also in that year, she appeared in a graphically violent scene in the Rob Zombie film The Devil's Rejects. Though the scene was cut from the final film, it is available in the deleted scenes on the DVD release.

She starred as Becky in 2006's Clerks II, and mentioned in Back to the Well, the making-of documentary, that the donkey show sequence was what made her decide to take the role. In May of the same year, Dawson, an avid comic book fan, co-created the comic book miniseries Occult Crimes Taskforce. She was at the 2007 Comic-Con to promote the comic. She co-starred with former Rent alum Tracie Thoms in the Quentin Tarantino throwback movie Death Proof in 2007, part of the Tarantino/Robert Rodriguez double feature Grindhouse. She teamed up with friend Talia Lugacy, whom she met at the Lee Strasberg Academy, to produce and star in Descent. On July 7, 2007, Dawson presented at the American leg of Live Earth.

Dawson dated former Sex and the City star Jason Lewis for two years. They lived together in Los Angeles until they separated in November 2006. She started dating director Danny Boyle in 2012, after having been cast in his 2013 film Trance. The couple split in March 2013.

Dawson is also a self-professed Trekkie who mentioned both her and her brother's love of Star Trek in an interview with Conan O'Brien, and also demonstrating her knowledge of several words of Klingon.