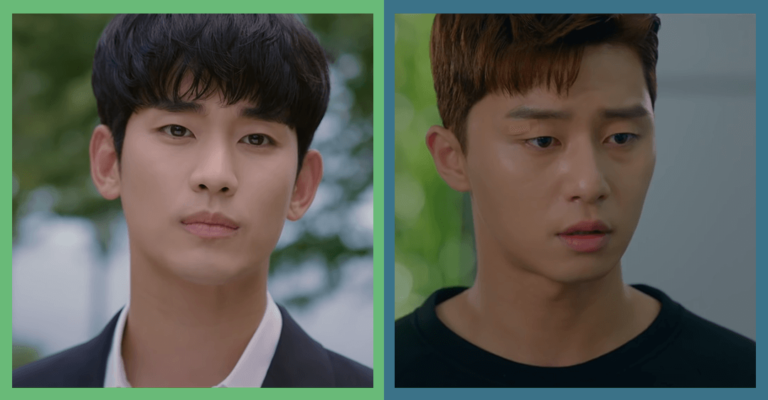 Whether you’ve been a fan of K-dramas for years now or have only just discovered the wonder of these shows, you might have already found yourself smitten with one or two (or ten) K-drama actors. It may be the character’s brooding personality or the actor himself’s natural aegyo, but we know you’d definitely have already experienced checking out or staying for a drama all because of a character!

We’re listing down 10 of our favorite K-drama male leads and why we just can’t help but love them every time they’re on our screens!

Cha Eun Ho of Romance is a Bonus Book

There’s no denying that Lee Jong Suk nails every role given to him, whether it’s as a journalist in Pinocchio or as a webtoon character in W – Two Worlds. However, we especially loved him in Romance is A Bonus Book, where he plays the charming writer, Cha Eun Ho.

His character in the drama is the definition of pure, wanting nothing but the best for his best friend Dan I. Despite all the things she went through, he stayed by her side, helping her find her footing again to becoming a career woman after being on a break for years.

Ko Dong Man of Fight For My Way

Before we loved him in Itaewon Class and What’s Wrong With Secretary Kim, Park Seo Joon made us swoon as Ko Dong Man in Fight For My Way.

Here, he portrays a struggling athlete who fought for his dream and passion even if things always seem to not favor him. Another thing we love about his character is his attitude toward Ae Ra and his friends, how he is always there with them to celebrate their successes, and comfort them when they experience failures!

Lee Min Ho played the Lee Gon, the King of the Kingdom of Corea in the 2020 drama The King: Eternal Monarch. His character in this drama is smarter and definitely more mature than his previous role where he usually portrays the rich and snobby male lead. What we love about his role in this drama is how he manages to juggle his role as a King, protecting his kingdom, while also maintaining a relationship with Ji Eun Tak, who’s from a parallel world.

After all the conflicts of the story get resolved, Lee Gon and Ji Eun Tak both reach a compromise, a mature decision instead of making one that could drastically affect the people around them.

Moon Gang Tae in It’s Okay to Not Be Okay

Kim Soo Hyun’s Moon Gang Tae is probably one of the more well-written characters in the K-drama world. He’s mature, caring, and protective of the people he cares about, even if that means sacrificing his own happiness. In the end, though, he learns how to care for both Sang Tae and Moon Young, all while still knowing how to put himself first and be his own person.

When it comes to his relationship with Moon Young, Gang Tae also knows how to distance himself when he feels like she needs space. However, he also knows when he should stay with her, despite her telling him to leave.

Nam See Hee of Because This is My First Life

At first glance, Lee Min Ki’s Nam Se Hee may be far from the dream K-drama boy. He’s quiet and introverted, has no social life, and would probably choose his cat over any other person out there. However, what he lacked in social skills, he makes up in the little things that show just how much of a good guy he is.

He respects Ji Ho’s boundaries, makes sure he’s there when she needs him, and shows his care for her in a subtle way. He also keeps his promise which he made with Ji Ho’s mom during their wedding day, even if they were still in a fake relationship.

Hwang Yong Sik of When the Camellia Bloom

Anyone who’s ever seen When the Camellia Blooms would probably find it hard to not fall in love with Kang Ha Neul’s Hwang Yong Sik. He’s quirky, funny, and he’s a man with a drone! He’s always been known for being righteous, and he proves this when he continuously defends Dong Baek to the ahjumma of the community when they were gossiping about her for being a single mother with a bar.

After seeing Ha Neul in dramas where he’s either the second lead (Scarlet Heart Ryeo, anyone?) or the stoic office worker (in Misaeng!), it’s a breath of fresh air to see him play such a bright character like Yong Sik!

Ri Jeong Hyeok of Crash Landing On You

Ah yes, of course, who would miss Captain Ri? While he may look like the brooding soldier from the outside, Ri Jeong Hyeok is actually pretty thoughtful and caring towards the people he is close with. When Se Ri crash-landed in North Korean territory, he keeps her under his wing, while he tries to find a way to send her back home.

Let’s also not forget how he never had any second thoughts on getting himself to South Korea as soon as he learned that Se Ri might be in danger. Get yourself a guy who’d literally cross borders twice a year for you, right?

Nam Joo Hyuk’s Jung Joon Hyung is the definition of “Boyfriend Goals”, and we all know why! As an athlete himself, Joo Young has always been supportive of the things Kim Bok Joo wants to do. Unlike other K-dramas where the main character has to go through some transformation to catch the attention of the male lead, Joon Hyung has always been fond of Bok Joo and has always accepted her for what she is, chubby cheeks and all.

While there are so many people who have been rooting for the other guy of the series, we really can’t disregard the fact that Park Bo Gum’s Choi Taek has also been such a good male lead. He was quiet, imperfect, dorky, and he seems like the type of guy you’d probably meet once in your life. While he may not always show it, he deeply cares about his friends and the people in his neighborhood, and he shows them this by being there for them when they need it. He also doesn’t hesitate to act on his feelings, which is probably the reason why he was right there on time to meet Duk Seon that one cold day!

Played by: Jung Hae In

In One Spring Night, Jung Hae In plays Yoo Ji Ho, a single father who works as a pharmacist. While there may be times that he’s reckless, he’s mature and patient most of the time, a result of him being a parent. When it comes to his relationship with Jung In, he makes sure that she understands just how important his son is to him, and that he will always be putting him first more than anything else.

Did we miss your favorite K-drama boy? Let us know in the comments!

Homestream images are screenshot from official videos from KBS and Netflix.