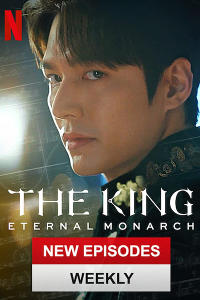 The King: Eternal Monarch is an upcoming South Korean television series, starring Lee Min-ho, Kim Go-eun and Woo Do-hwan. Produced by Hwa&Dam Pictures and its parent company Studio Dragon, it is set to premiere on SBS TV on April 17, 2020.

Story about a Korean emperor Lee Gon (Lee Min-ho) who tries to close the doors to a parallel world which was opened by demons who were unleashed by a deity into the human world, and a detective Jung Tae-eul (Kim Go-eun) who tries to protect the people and the one she loves.