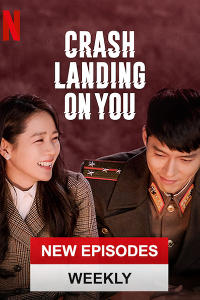 Crash Landing on You is a South Korean television series directed by Lee Jeong-hyo and featuring Hyun Bin, Son Ye-jin, Kim Jung-hyun, and Seo Ji-hye. It is about a South Korean chaebol heiress who, while paragliding in Seoul, South Korea, is swept up in a sudden storm and crash-lands in the North Korean portion of the DMZ.

It aired on tvN in South Korea and on Netflix worldwide from December 14, 2019, to February 16, 2020. It is the highest rated tvN drama and the third highest-rated South Korean TV drama in cable television history.