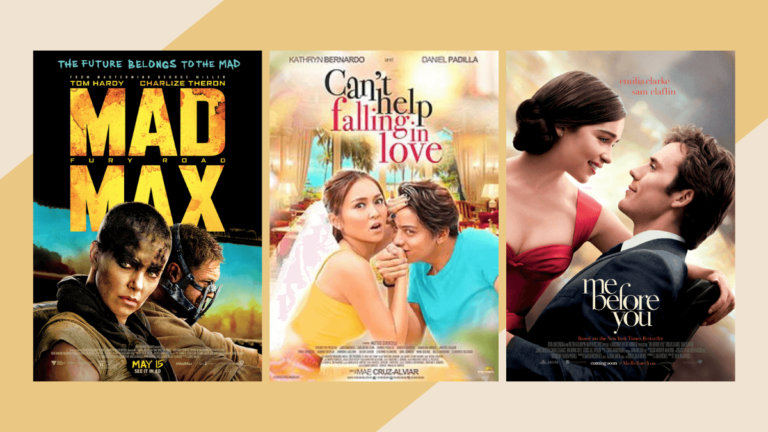 Isn’t it a bummer when you see your favorite movie already playing halfway through when you turn on the TV? Fret not! From rom-com and action to horror and thriller, we’re giving you a heads up on all the must-watch movies on TV from May 16 to 22, 2022.

Top Gun
(4:25pm, Cinemax)
The Top Gun Naval Fighter Weapons School is where the best of the best train to refine their elite flying skills. When hotshot fighter pilot Maverick is sent to the school, his reckless attitude and cocky demeanor put him at odds with the other pilots, especially the cool and collected Iceman. But Maverick isn’t only competing to be the top fighter pilot, he’s also fighting for the attention of his beautiful flight instructor, Charlotte Blackwood.

Love Is Blind
(5pm, Cinema One)
A woman with selective perception, who cannot see her mother, is prescribed by her psychiatrist to spend time with a suicidal man that has fallen in love with her – but she cannot see either.

Maybe This Time
(5:30pm, PBO)
Steph learns to be tough and sets her sights on bigger dreams after Tonio ends their relationship without saying goodbye.

This Guy’s In Love With You Mare
(5:30pm, PBO)
Lester catches his ex-boyfriend proposing marriage to Gemma. He hatches a plan to keep Gemma away from his ex by making her fall in love with him.

Mad Max: Fury Road
(6:05pm, HBO)
Years after the collapse of civilization, the tyrannical Immortan Joe enslaves apocalypse survivors inside the desert fortress the Citadel. When the warrior Imperator Furiosa leads the despot’s five wives in a daring escape, she forges an alliance with Max Rockatansky, a loner and former captive. Fortified in the massive, armored truck the War Rig, they try to outrun the ruthless warlord and his henchmen in a deadly high-speed chase through the Wasteland.

The Bucket List
(6:35pm, Cinemax)
Billionaire Edward Cole and car mechanic Carter Chambers are complete strangers, until fate lands them in the same hospital room. The men find they have two things in common: a need to come to terms with who they are and what they have done with their lives, and a desire to complete a list of things they want to see and do before they die. Against their doctor’s advice, the men leave the hospital and set out on the adventure of a lifetime.

Forever and a Day
(7pm, Cinema One)
A young man falls in love with his new friend, but she pushes him away.

Talk Back and You’re Dead
(9:30pm, PBO)
Samantha falls in love with a hot-headed guy named Top, the leader of a gang.

Me Before You
(12:45pm, HBO)
Young and quirky Louisa “Lou” Clark moves from one job to the next to help her family make ends meet. Her cheerful attitude is put to the test when she becomes a caregiver for Will Traynor, a wealthy young banker left paralyzed from an accident two years earlier. Will’s cynical outlook starts to change when Louisa shows him that life is worth living. As their bond deepens, their lives and hearts change in ways neither one could have imagined.

The Amazing Praybeyt Benjamin
(5:30pm, PBO)
After defeating terrorists, Pvt. Benjamin becomes the Philippines’ worldwide sensation, but the attention causes him to neglect his duties and, to remain enlisted, he must become a bodyguard for a misbehaving kid.

Close To You
(7pm, Cinema One)
A man realizes he’s in love with his childhood friend.

Drag Me To Hell
(11:55pm, Cinemax)
Christine Brown has a loving boyfriend and a great job at a Los Angeles bank. But her heavenly life becomes hellish when, in an effort to impress her boss, she denies an old woman’s request for an extension on her home loan. In retaliation, the crone places a curse on Christine, threatening her soul with eternal damnation. Christine seeks a psychic’s help to break the curse, but the price to save her soul may be more than she can pay.

Gone Girl
(1:10pm, Cinemax)
In Carthage, Mo., former New York-based writer Nick Dunne and his glamorous wife Amy present a portrait of a blissful marriage to the public. However, when Amy goes missing on the couple’s fifth wedding anniversary, Nick becomes the prime suspect in her disappearance. The resulting police pressure and media frenzy cause the Dunnes’ image of a happy union to crumble, leading to tantalizing questions about who Nick and Amy truly are.

Harry Potter and The Order of the Phoenix
(4:15pm, HBO)
Now in his fifth year at Hogwarts, Harry learns that many in the wizarding community do not know the truth of his encounter with Lord Voldemort. Cornelius Fudge, minister of Magic, appoints his toady, Dolores Umbridge, as Defense Against the Dark Arts teacher, for he fears that professor Dumbledore will take his job. But her teaching is deficient and her methods, cruel, so Harry prepares a group of students to defend the school against a rising tide of evil.

Harry Potter and the Half Blood Prince
(6:30pm, HBO)
As Death Eaters wreak havoc in both Muggle and Wizard worlds, Hogwarts is no longer a safe haven for students. Though Harry suspects there are new dangers lurking within the castle walls, Dumbledore is more intent than ever on preparing the young wizard for the final battle with Voldemort. Meanwhile, teenage hormones run rampant through Hogwarts, presenting a different sort of danger. Love may be in the air, but tragedy looms, and Hogwarts may never be the same again.

Suddenly It’s Magic
(7pm, Cinema One)
An actor and a baker experience heartbreak but find love and solace together.

Sakal, Sakali, Saklolo
(7pm, Cinema One)
First-time parents have a lot to learn about raising children.

13 Hours
(10:45pm, HBO)
On Sept. 11, 2012, Islamic militants attack the U.S. Consulate in Benghazi, Libya, killing Ambassador J. Christopher Stevens and Sean Smith, an officer for the Foreign Service. Stationed less than one mile away are members of the Annex Security Team, former soldiers assigned to protect operatives and diplomats in the city. As the assault rages on, the six men engage the combatants in a fierce firefight to save the lives of the remaining Americans.

Space Jam
(5:05pm, Cinemax)
Swackhammer, an evil alien theme park owner, needs a new attraction at Moron Mountain. When his gang, the Nerdlucks, heads to Earth to kidnap Bugs Bunny and the Looney Tunes, Bugs challenges them to a basketball game to determine their fate. The aliens agree, but they steal the powers of NBA basketball players, including Larry Bird and Charles Barkley — so Bugs gets some help from superstar Michael Jordan.

Pixels
(5:25pm, HBO)
When aliens intercept video feeds of classic arcade games and misinterpret them as a declaration of war, they attack Earth, using the games as models. Knowing that he must employ a similar strategy, President Will Cooper recruits his childhood pal, former video-game champ and home-theater installer Sam Brenner, to lead a team of old-school arcade players and a military specialist in an all-out battle to save the planet.

It Takes A Man and A Woman
(7:15pm, PBO)
The relationship between Miggy and Laida didn’t last, and neither did Miggy’s business success. When Laida returns to help with a presentation to MET, old feelings come to the surface.

Forever And A Day