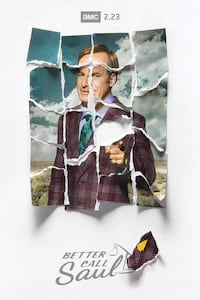 Crime, Drama
Be the first to rate this

Better Call Saul follows the transformation of James "Jimmy" McGill (Bob Odenkirk), a former con artist who is trying to become a respectable lawyer, into the personality of the flamboyant criminal lawyer Saul Goodman (a play on the phrase "[it]'s all good, man!"), over the six-year period prior to the events of Breaking Bad, spanning from approximately 2002 to 2008 [cont.]

[About]
Better Call Saul is an American crime drama television series created by Vince Gilligan and Peter Gould. It is both a spin-off and a prequel of Gilligan's previous series, Breaking Bad. Set in the early to mid-2000s in Albuquerque, New Mexico, the series develops Jimmy McGill (Bob Odenkirk), an earnest lawyer and former con-man, into a greedy criminal defense attorney known as Saul Goodman. Also shown is the moral decline of retired police officer Mike Ehrmantraut (Jonathan Banks), who becomes closely affiliated with the Juarez drug cartel to support his daughter-in-law and her daughter after his son is killed. Jimmy and Mike's interactions remain sporadic until their respective storylines fully converge. The show premiered on AMC on February 8, 2015, airing five seasons to date. A sixth and final season, consisting of 13 episodes, is set to premiere in early 2022. [cont.]