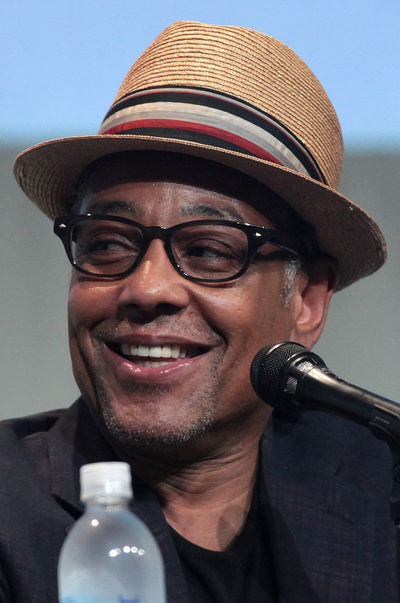 Giancarlo Giuseppe Alessandro Esposito (born April 26, 1958) is an American actor and director. He is best known for his portrayal of Gustavo "Gus" Fring on the AMC series Breaking Bad, for which he won the Best Supporting Actor in a Drama award at the 2012 Critics' Choice Television Awards and was nominated for an Outstanding Supporting Actor in a Drama Series award at the 2012 Primetime Emmy Awards.

He is well-known for his roles in Spike Lee films, such as Do the Right Thing, School Daze, and Mo' Better Blues. Other notable films include The Usual Suspects and King of New York. He has portrayed Sidney Glass/Magic Mirror on ABC's Once Upon a Time and Major Tom Neville in the NBC series Revolution.

Giancarlo Esposito was born in Copenhagen, Denmark, the son of an Italian father, Giovanni Esposito, and an American mother, Elizabeth Foster. His mother was an African-American opera and nightclub singer from Alabama, and his father was a stagehand and carpenter from Naples. Esposito lived in Europe until the age of 6, when his family settled in Manhattan, New York. He attended Elizabeth Seton College in New York and received a two-year degree in radio and television communications.

Esposito made his Broadway debut (1966) at age eight playing a slave child opposite Shirley Jones in the short-lived musical Maggie Flynn (1968), set during the New York Draft Riots of 1863.

During the 1980s, Esposito appeared in films such as Maximum Overdrive, King of New York, and Trading Places. He also performed in TV shows such as Miami Vice and Spenser: For Hire. He played J.C. Pierce, a cadet in the 1981 movie Taps.

In 1988, he landed his breakout role as the leader ("Dean Big Brother Almighty") of the black fraternity "Gamma Phi Gamma" in director Spike Lee's film School Daze, exploring color relations at black colleges. Over the next four years, Esposito and Lee collaborated on three other movies: Do the Right Thing, Mo' Better Blues, and Malcolm X. During the 1990s Esposito appeared in the acclaimed indie films Night on Earth, Fresh and Smoke, as well as its sequel Blue in the Face. He also appeared in the mainstream film Reckless with Mia Farrow, and Waiting to Exhale starring Whitney Houston and Angela Bassett.

Esposito is known for his portrayal of FBI agent Mike Giardello on the TV crime drama Homicide: Life on the Street. That role drew from both his African-American and Italian ancestry. He played this character during the show's seventh and final season. Mike's estranged father, shift lieutenant Al Giardello, is portrayed as subject to racism, something Esposito's character practiced in School Daze. Another multiracial role was as Sergeant Paul Gigante in the television comedy series, Bakersfield P.D. (Fox Broadcasting Company, 1993–94).

In 1997, Esposito played the film roles of Darryl in Trouble on the Corner and Charlie Dunt in Nothing to Lose. Other TV credits include NYPD Blue, Law & Order, The Practice, New York Undercover, and Fallen Angels: Fearless.

Esposito married Joy McManigal in 1995; they later divorced. He has 4 daughters.