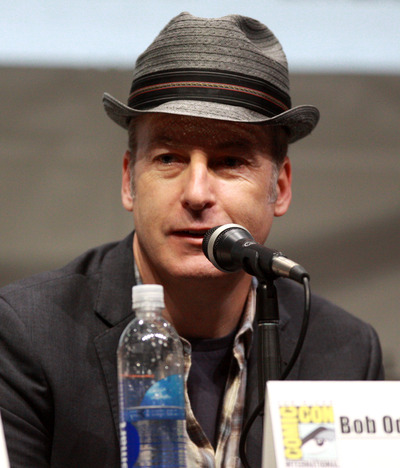 Robert John "Bob" Odenkirk (born October 22, 1962) is an American actor, comedian, writer, director and producer. He is best known for being the co-creator and co-star of the HBO sketch comedy series Mr. Show with Bob and David and for his role as Walter White's sleazy lawyer, Saul Goodman on AMC's Breaking Bad. Odenkirk is currently in talks to star in an upcoming Saul Goodman spin-off series for AMC.

In the 1980s and 1990s, he worked as a writer for such television shows as Saturday Night Live, Get A Life, The Ben Stiller Show, and The Dennis Miller Show. In the mid-1990s, Odenkirk and David Cross created the Emmy-winning sketch comedy program Mr. Show with Bob and David, which ran for four seasons and ultimately became a cult success. In the early 2000s, Odenkirk discovered Tim Heidecker and Eric Wareheim and produced their television series Tom Goes to the Mayor and Tim and Eric Awesome Show, Great Job!. He has directed three films: Melvin Goes to Dinner (2003), Let's Go to Prison (2006), and The Brothers Solomon (2007).

Odenkirk is of half Irish descent and half German descent. His parents divorced. His father's battle with alcoholism would influence Bob's decision to avoid alcohol almost completely. He would later say that he grew up "hating" Naperville because "it felt like a dead end, like Nowheresville. I couldn't wait to move into a city and be around people who were doing exciting things." Odenkirk's father died of terminal bone cancer in 1995.

Odenkirk went to Naperville North High School and attended Marquette University in Milwaukee, WI, then transferred to Southern Illinois in Carbondale, IL, "honing his sketch-writing and performance skills with live shows on both colleges' radio stations." He began his foray into comedy writing as a radio DJ for WIDB (Carbondale, Illinois), his local college station at SIU-Carbondale. He worked at WIDB with newsman Greg Weindorf and traffic man Matt "The Agitator" Helser now of Dirty Laundry Podcast fame. He created a radio comedy hour, sometimes an hour and a half, called "The Prime Time Special" with many recurring characters. "It often had us in stitches" said then WIDB Program Director, Victor Lentini. After three years of college, Odenkirk decided to try writing and improv in Chicago. First studying with Del Close, Odenkirk attended "The Players Workshop of the Second City" where he met Robert Smigel, and they began a collaboration that would last for years and take Bob to Saturday Night Live.

Odenkirk has said his strongest comedic influence was Monty Python's Flying Circus, primarily due to its combination of cerebral and simple humor. Other influences included radio personality Steve Dahl, SCTV,Steve Martin's Let's Get Small, Woody Allen, The Credibility Gap, and Bob and Ray. He visited Chicago'sSecond City Theater at the age of 14. His brother is comedy writer Bill Odenkirk.

Odenkirk was hired as a writer at Saturday Night Live in 1987 and worked there through 1991. Working alongside Robert Smigel and Conan O'Brien, he contributed to many sketches they created, but felt uncertain of the efficacy of his own writing at the show. He acted in several small roles on the show, most visibly during a 1991 parody commercial for Bad Idea Jeans.

During his final year at SNL, he worked alongside Adam Sandler, David Spade, Chris Rock, and Chris Farley, but his desire to perform caused him to leave the show. He has credited SNL with teaching him many lessons about sketch writing, from senior writers like James Downey and Al Franken, as well as his friends Smigel and O'Brien. When Saturday Night Live took its 1988 summer break, Odenkirk returned to Chicago to perform a stage show with Smigel and O'Brien, titled Happy Happy Good Show. The following summer he did a one-man show, Show-Acting Guy, directed by Tom Gianas. During his final summer hiatus, he wrote and acted in the Second City Mainstage show, Flag Burning Permitted in Lobby Only. In that particular show, he wrote the character "Matt Foley, Motivational Speaker", for Chris Farley, which would later be reprised on SNL.

In 1991, Odenkirk was hired to write for the TV show Get a Life, which starred Late Night with David Letterman alumnus Chris Elliott. Other notable writers on the show included Adam Resnick and Charlie Kaufman. The show was short-lived, and in 1992, Odenkirk briefly wrote for The Dennis Miller Show.

Odenkirk's friendship with Ben Stiller, with whom he briefly shared an office at SNL, would lead to him being hired for the cast of The Ben Stiller Show in 1992. Working as both a writer and actor on the show, he created and starred in the memorable sketch "Manson Lassie", and helped the show win an Emmy Award for writing.

Created by Odenkirk and David Cross, Mr. Show ran on HBO for 4 seasons, over 33 episodes. The show featured a number of comedians in the early stages of their careers, including Sarah Silverman, Paul F. Tompkins, Jack Black, Tom Kenny, Mary Lynn Rajskub, Brian Posehn and Scott Aukerman. While nominated for multiple Emmy awards in writing and generally well liked by critics, it never broke out of a "cult" audience into larger mainstream acceptance. After Mr. Show, Bob and David and the writers from the staff wrote the movie Run, Ronnie, Run. The film was an extension of a sketch from the first season of the show. However, the studio took production control away from Cross and Odenkirk during the editing stages, and the pair disowned the final product.

In 2009, Odenkirk joined the cast of AMC's Breaking Bad as corrupt lawyer Saul Goodman. He appeared as a guest star in three episodes of the second season, and eventually became a series regular for the seasons after and remained on the show until its final season. It was announced on September 11, 2013 that AMC greenlit a spin-off series for Odenkirk's character Saul Goodman from Breaking Bad, a prequel, highlighting Goodman before he met Walter. The show, Better Call Saul, is set to consist of one-hour episode formats.

Odenkirk's first roles in film were in such films as Wayne's World 2, The Cable Guy, Can't Stop Dancing and Monkeybone, albeit in very minor roles. In 2003, Odenkirk directed Melvin Goes to Dinner and also played the role of Keith. The film received positive reviews from critics and won the Audience Award at the SXSW Film and Music Festival. It was later self-released in five cities, then distributed on DVD by Sundance.

After starring in Breaking Bad, Odenkirk began to have more prominent roles in critically successful films such as The Giant Mechanical Man, The Spectacular Now, which received the Special Jury Award for Acting at the 2013 Sundance Film Festival, and the Alexander Payne-directed film Nebraska, which was nominated for a Palme d'Or at the 2013 Cannes Film Festival. He also began to star more prominently in comedy films as well, such as Take Me Home Tonight, Ass Backwards, Dealin' with Idiots and Hell & Back. Odenkirk was one of the directors of the 2013 anthology comedy film Movie 43.