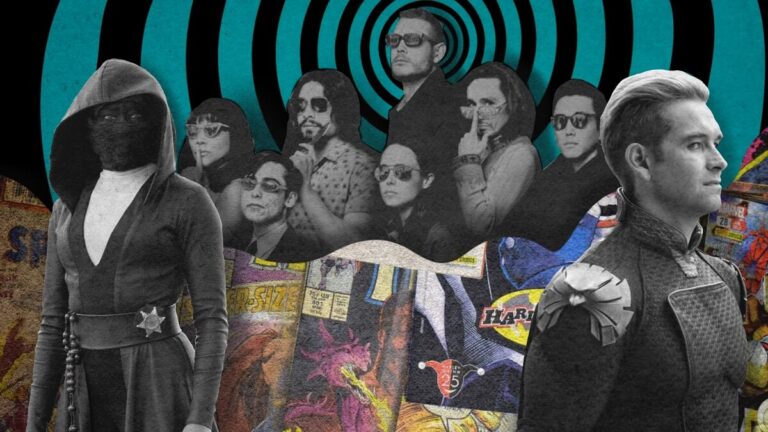 For comic book fans, 2020 was supposed to be another year to geek out on films like Wonder Woman 1984, Black Widow, New Mutants, and more. But then of course, with the COVID-19 pandemic halting theater operations, it seems that we’d have to wait much longer.

Fortunately, besides having the time to rewatch the past films adapted from our favorite comic book universes, we also have the time to binge watch TV series of the same genre. And if you’re looking for some of the most binge-worthy out there, then here’s a list for you!

From stories of superpowered individuals to tales of post-apocalyptic survival, here are fifteen live-action TV shows based on comic books that are worth a place on your binge list!

The Boys is based on the comic book of the same name by Garth Ennis and Darick Robertson. It is set in a world where people with superpowers are turned into ‘superheroes’ by the powerful corporation, Vought. While they are tagged heroes, most of these supers are corrupt and use their inhuman abilities for their own interests. But the Boys, a group of vigilantes, will do anything to pull them down from their fake pedestals.

Based on the graphic novel written by Gerard Way, The Umbrella Academy is an unconventional superhero show from Netflix. It follows a dysfunctional family of adopted children who were mysteriously born with superpowers. After the death of their adoptive father, the estranged siblings come together, only to discover that the world will soon be destroyed and they are humanity’s last hope.

Lucifer is based on The Sandman spin-off comics of the same title. It follows the eponymous devil who has left Hell to run a nightclub in Los Angeles. After being involved in a shootout while meeting with an LA detective, Lucifer becomes an LAPD consultant, helping the forces of justice to punish the guilty in the mortal world.

Doom Patrol is a dark-humored DC show that shares its universe with Titans. It brings together a ragtag family of individuals who have all survived tragic incidents, thanks to the old doctor they call Chief. Despite their incidents giving them superpowers, these people are also broken in their own ways. To protect them from public scrutiny, the Chief keeps the group safely in his mansion, until a threat from an omnipresent supervillain forces them to team up and act like heroes.

Watchmen is an original series based on the world and characters created by Alan Moore. Like its source material, the show is also a commentary on political and social issues. It is set in an alternate reality where masked heroes became a thing until it was outlawed due to their violent ways. Fast forward to the present, the police now wore masks and costumes to protect their identities while a white supremacist group called the Seventh Kavalry is on the rise.

Marvel’s Daredevil is a well-loved show which, unfortunately, met an untimely cancellation after three seasons. But despite this, fans are still hoping to see the show return. It tells the story of Matt Murdock who, as a kid, became blind after a freak accident. But despite Matt losing his vision, he also developed superhuman senses. Now he lives a double life as a lawyer by day, and as the vigilante Daredevil at night.

Titans is a dark and gritty DC show based on the Teen Titans comics. It follows Dick Grayson, also known as Robin, who has now left Batman’s side to bring down criminals on his own. But when the powerful demon Trigon threatens to invade the world, Dick must step up and lead a team of young heroes to fight Trigon, while they deal with their inner demons as well.

Based on the Canadian comic Warrior Nun Areala, this Netflix series focuses on badass nuns wielding combat weapons to fight demonic forces lurking on Earth. It tells the story of the orphan Ava who spent her life paralyzed until the day she died. She is accidentally revived by a secret sect of nuns using the ‘sacred halo’, which also healed her and granted her superpowers. Now she must use her newfound abilities to fight alongside the other warrior nuns.

One of the most popular shows in TV history, The Walking Dead was first a comic book before it became a hit on our small screens. It centers around Rick Grimes, a deputy who wakes up only to find out that a zombie apocalypse has broken out. After reuniting with his family and a group of survivors, Rick steps up to be their leader in a world where both the dead and undead have become equally dangerous.

Based on the comic book by Dennis Liu, Raising Dion tells the story of a mother, Nicole, who must raise her child alone after the death of her husband Mark. While being a single mother is already a heroic task, Nicole’s son Dion also has superpowers and she must protect him from people who want to exploit those abilities.

Gotham is an origin story set in the eponymous city many years before Batman prowled its streets at night. It follows the police recruit James Gordon as he solves crimes and tries to uphold justice in the crime-ridden city. Meanwhile, we also get to see the tragic journey of the young Bruce Wayne that would one day lead him to seek justice on his own way– as the Caped Crusader, the Batman.

Based on a French graphic novel from Jacques Lob and Jean-Marc Rochette titled Le Transperceneige, Snowpiercer first became a film by Bong Joon-ho before it was adapted into a Netflix series. It is set in a post-apocalyptic world where the whole planet has become a frozen wasteland and humans only survived by boarding a ginormous perpetually-moving train. But with inequality and rampant abuses prevalent inside the train, another revolutionary war is brewing.

The Flash is one of the most popular series from CW’s DC universe on TV, also known as the Arrowverse. It tells the story of crime-scene investigator Barry Allen who gains superspeed abilities after the STAR Labs Particle Accelerator exploded. With his newfound powers, Barry dons a red costume and fights crime caused by other Metahumans like him under the name Flash.

A spin-off from CW’s Arrowverse, Legends of Tomorrow follows the time-traveller Rip Hunter who has seen an apocalyptic future. To prevent the end of the world, and the end of all time, he must bring together a ragtag group of both superheroes and villains to help him.

Agents of SHIELD is the first TV show to be released that is tied to the Marvel Cinematic Universe. The show follows agent Phil Coulson who is revived after his demise in the film The Avengers. Now Coulson must assemble a small team of SHIELD agents and investigate a conspiracy hacktivist group called the Rising Tide.

Which one is your favorite? Let us know by leaving a comment below!