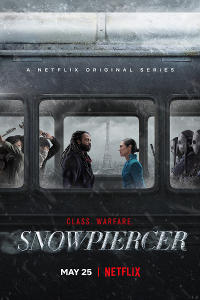 Action, Drama, Sci-Fi
Be the first to rate this

'Snowpiercer' is an upcoming American post-apocalyptic dystopian thriller television drama series that is set to air on TNT on May 17, 2020. It is based on both the 2013 South Korean-Czech film of the same name, directed by Bong Joon-ho, and the 1982 French graphic novel Le Transperceneige, from which the film was adapted, by Jacques Lob, Benjamin Legrand, and Jean-Marc Rochette.

While in development at TNT for over three years, the series faced numerous production issues and delays arising from creative differences between the series' producers and the network. The series remained in development hell until May 2019, when it was announced that the series would instead air on TNT's sister network TBS for a spring 2020 release, and that it was already renewed for a second season. However, in September 2019, the decision to change networks was reversed.