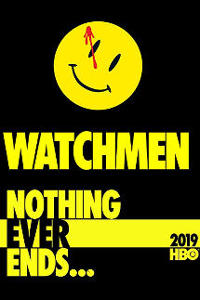 Watchmen is an upcoming American superhero drama television series, based on the DC Comics limited series of the same name created by Alan Moore and Dave Gibbons, created and developed by Damon Lindelof for HBO, with Lindelof serving as executive producer and writer. There will be nine episodes in the first season.

The series is taking place in an alternate contemporary reality in the United States, in which superheroes and masked vigilantes were outlawed due to their violent methods, but some of them gather around to start a revolution while others attempt to stop it.

In a lengthy Instagram post from Damon Lindelof while the show was in early production, it was revealed that the Watchmen series will not be a direct adaptation of the original source material, instead, being "remixed"; aiming to tell an entirely new story set in the world where the events of the original storyline took place. The series will also showcase different points of view, with the only characters from the original storyline confirmed to appear in the series being Doctor Manhattan, the former Silk Spectre and Ozymandias.

In July 2019, during San Diego Comic-Con, a new trailer was revealed, announcing that the series is set to premiere in October 2019.

"Watchmen takes place in an alternative, contemporary reality in the United States, in which masked vigilantes became outlawed due to their violent methods. Despite this, some gather around in order to start a revolution while others are out to stop it before it is too late, as a greater question rises above them all; who watches the Watchmen?"