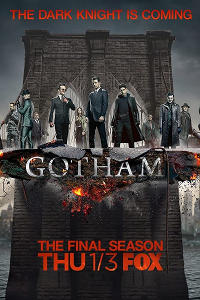 Gotham is an American action crime drama television series developed by Bruno Heller, produced by Warner Bros. Television and based on characters published by DC Comics and appearing in the Batman franchise, primarily those of James Gordon and Bruce Wayne. The series premiered on Fox on September 22, 2014, and concluded on April 25, 2019. The series stars Ben McKenzie as Jim Gordon and David Mazouz as Bruce Wayne. The series was originally intended to focus only on Gordon's early days with the Gotham City Police Department, but they subsequently included the Bruce Wayne character and the origin stories of several Batman villains, including Penguin, Riddler, Catwoman, Poison Ivy, Scarecrow, Mr. Freeze, Hugo Strange, Solomon Grundy, Mad Hatter, Ra's al Ghul, Nyssa al Ghul, Bane, and The Joker.

Development for a prequel series based on Batman began in September 2013, with Bruno Heller hired by Fox to serve as a writer and executive producer. In March 2014, Fox originally ordered 16 episodes for its first season before expanding it to 22. Filming primarily took place across New York City.

Since its broadcast, Gotham received positive reviews from critics, with many praising the performances, production values, writing, villains, character development and the fresh and fun take on the Batman mythos. The show takes creative liberty in changing its characters in ways previously unseen before; giving viewers an origin story of each character before they transform into the legendary heroes and villains known today. Despite initially high viewership, ratings began dropping considerably throughout the series' run. However, it continued to attract consistent acclaim from critics as the series progressed. In May 2018, Fox renewed the series for a fifth and final season, consisting of 12 episodes, which premiered on January 3, 2019, and concluded on April 25, 2019