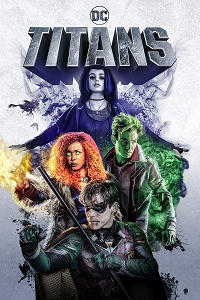 Titans is an upcoming American web television series that will air on DC Universe, based on the DC Comics team of the same name. Akiva Goldsman, Geoff Johns, and Greg Berlanti created the series, which sees Brenton Thwaites star as Dick Grayson / Robin, the leader of the Titans, alongside Anna Diop, Teagan Croft, and Ryan Potter as Starfire, Raven, and Beast Boy, respectively. Titans is set to comprise 12 episodes and premiere on October 12, 2018.

A live-action series based on the Teen Titans entered development in September 2014 for the cable channel TNT, with Goldsman and Marc Haimes writing the pilot. The pilot had been ordered by December 2014, but never came to fruition, with TNT announcing in January 2016 it would no longer be moving forward with the project. In April 2017, it was announced that the series was being redeveloped for DC Comics' new direct-to-consumer digital service, with Goldsman, Johns, and Berlanti attached. Brenton Thwaites was cast as Dick Grayson in September 2017, and other series regulars were cast between August and October 2017. In May 2018, the spin-off series Doom Patrol was announced, which will pick up after the events of Titans.