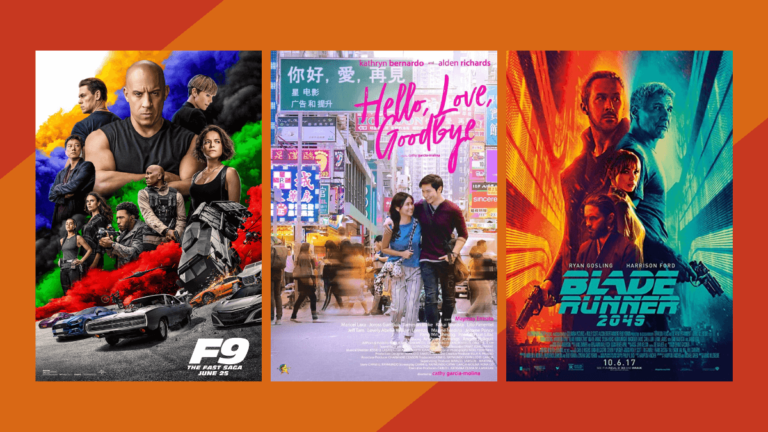 Isn’t it a bummer when you see your favorite movie already playing halfway through when you turn on the TV? Fret not! From rom-com and action to horror and thriller, we’re giving you a heads up on all the must-watch movies on TV from May 9 to 15, 2022.

Ava
(3pm, HBO)
An assassin becomes marked for death by her own black ops organization after questioning orders and breaking protocol.

Coach Carter
(5:55pm, Cinemax)
In 1999, Ken Carter returns to his old high school in Richmond, California, to get the basketball team into shape. With tough rules and academic discipline, he succeeds in setting the players on a winning streak. But when their grades start to suffer, Carter locks them out of the gym and shuts down their championship season. When he is criticized by the players and their parents, he sticks to his guns, determined that they excel in class as well as on the court.

In The Name Of Love
(7pm, Cinema One)
Set in the heyday of the so-called Japayuki, it tells the story of lovers Cedes and Emman, both entertainers in Japan whose lives are turned upside down by a mistake that changes them forever. The two meet again many years later to rekindle their romance.

13 Hours
(7:40pm, HBO)
On Sept. 11, 2012, Islamic militants attack the U.S. Consulate in Benghazi, Libya, killing Ambassador J. Christopher Stevens and Sean Smith, an officer for the Foreign Service. Stationed less than one mile away are members of the Annex Security Team, former soldiers assigned to protect operatives and diplomats in the city. As the assault rages on, the six men engage the combatants in a fierce firefight to save the lives of the remaining Americans.

Ang Dalawang Mrs. Reyes
(9pm, Cinema One)
Devoted wives Lianne and Cindy got cheated on by their husbands who turn out to be gay.

Pixels
(7:15pm, HBO)
When aliens intercept video feeds of classic arcade games and misinterpret them as a declaration of war, they attack Earth, using the games as models. Knowing that he must employ a similar strategy, President Will Cooper recruits his childhood pal, former video-game champ and home-theater installer Sam Brenner, to lead a team of old-school arcade players and a military specialist in an all-out battle to save the planet.

The Forever Purge
(9pm, HBO)
Adela and her husband, Juan, live in Texas, where he works as a ranch hand for the wealthy Tucker family. Juan impresses the Tucker patriarch, Caleb, but that fuels the jealous anger of his son, Dylan. On the morning after the Purge, a masked gang of killers attacks the Tuckers, forcing both families to band together and fight back as the country spirals into chaos.

This Guy’s in Love with U Mare
(7:30pm, PBO)
Lester catches his ex-boyfriend proposing marriage to Gemma. He hatches a plan to keep Gemma away from his ex by making her fall in love with him.

T2
(9pm, Cinema One)
A volunteer taking care of a young girl learns she is being stalked by Engkantos putting their lives at risk.

Blade Runner 2049
(9pm, HBO)
Officer K, a new blade runner for the Los Angeles Police Department, unearths a long-buried secret that has the potential to plunge what’s left of society into chaos. His discovery leads him on a quest to find Rick Deckard, a former blade runner who’s been missing for 30 years.

All About Love
(1pm, Cinema One)
Courage, trust, and taking risks, what’s love got to do with it? A chance reunion between Kikay and her childhood buddy Kiko.

Just A Stranger
(7:15pm, PBO)
A married woman and a young man with a girlfriend must navigate their feelings after falling in love with each other.

The Hunger Games
(10pm, Cinemax)
Dom Toretto is living the quiet life off the grid with Letty and his son, but they know that danger always lurks just over the peaceful horizon. This time, that threat forces Dom to confront the sins of his past to save those he loves most. His crew soon comes together to stop a world-shattering plot by the most skilled assassin and high-performance driver they’ve ever encountered — Dom’s forsaken brother.

Crazy, Stupid, Love
(8:55am, HBO)
Cal Weaver is living the American dream. He has a good job, a beautiful house, great children and a beautiful wife, named Emily. Cal’s seemingly perfect life unravels, however, when he learns that Emily has been unfaithful and wants a divorce. Over 40 and suddenly single, Cal is adrift in the fickle world of dating. Enter, Jacob Palmer, a self-styled player who takes Cal under his wing and teaches him how to be a hit with the ladies.

Jurassic World
(8pm, HBO)
Located off the coast of Costa Rica, the Jurassic World luxury resort provides a habitat for an array of genetically engineered dinosaurs, including the vicious and intelligent Indominus rex. When the massive creature escapes, it sets off a chain reaction that causes the other dinos to run amok. Now, it’s up to a former military man and animal exper to use his special skills to save two young brothers and the rest of the tourists from an all-out, prehistoric assault.

The Hangover
(11:45pm, Cinemax)
Two days before his wedding, Doug and three friends drive to Las Vegas for a wild and memorable stag party. In fact, when the three groomsmen wake up the next morning, they can’t remember a thing; nor can they find Doug. With little time to spare, the three hazy pals try to re-trace their steps and find Doug so they can get him back to Los Angeles in time to walk down the aisle.

Always Be My Maybe
(1pm, Cinema One)
Childhood sweethearts have a falling out and don’t speak for 15 years, only reconnecting as adults when Sasha runs into Marcus in San Francisco. Although the old sparks are still there, the couple live in different worlds.

Fantastic Beasts and Where To Find Them
(7:50pm, HBO)
Newt Scamander has just completed a global excursion to find and document an extraordinary array of magical creatures. Arriving in New York for a brief stopover, he might have come and gone without incident, were it not for a No-Maj named Jacob, a misplaced magical case, and the escape of some of Newt’s fantastic beasts, which could spell trouble for both the wizarding and No-Maj worlds.

The Suicide Squad
(10pm, HBO)
The government sends the most dangerous supervillains in the world — Bloodsport, Peacemaker, King Shark, Harley Quinn and others — to the remote, enemy-infused island of Corto Maltese. Armed with high-tech weapons, they trek through the dangerous jungle on a search-and-destroy mission, with only Col. Rick Flag on the ground to make them behave.

Fantastic Beasts And Where To Find Them