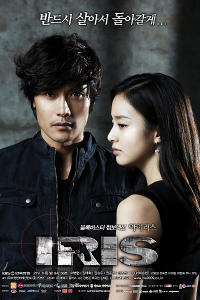 Best friends who are like brothers Kim Hyun-jun (Lee Byung-hun) and Jin Sa-woo (Jung Joon-ho), train under the South Korean army's 707th Special Mission Battalion until they are scouted by NSS (National Security Service). The two were independently scouted by the beautiful NSS agent, Choi Seung-hee (Kim Tae-hee). Unaware they have been scouted, the two are secretly captured and subjected to a simulated torture test. Both passed the test and are deemed qualified to become NSS agents. In the process, they both fall in love with Seung-hee, who has kept the scouting process a secret from them.

After completing the test, Hyun-jun and Sa-woo are introduced to the director of the NSS, Baek San (Kim Yeong-cheol). Baek San explains to them that the NSS is a secret organization tasked with preempting foreign threats and protecting the country's interests through wetwork operations, including assassination of anyone who could be a threat to South Korean (SK) national security. Since its founding in 1976, during the rule of Park Chung-hee, the agency's very existence has remained a state secret from everyone, including the President.

After entering NSS, the pair learn that Seung-hee had been their undercover scout agent. While both were surprised and somewhat hurt, Hyun-jun is angered the most as he feels his heart was toyed with. During a team celebration dinner, Hyun-jun confronts her alone and the two embraced the passion they have for one another. Afterward, the two maintain a secret romantic relationship.

Hyun-jun is then sent off on a solo mission to Hungary. In Hungary, Hyun-jun accomplishes his mission and while escaping, is wounded. Shortly later, Hyun-jun finds out that he was betrayed by fellow agent Sa-woo. Seung-hee attempts to help Hyun-jun escape, but a car explosion separates the two and both are misled into believing that the other is dead. Hyun-jun is then saved by an unknown voice and learns of the secret society "IRIS".

One year later, Hyun-jun returns to Korea to seek revenge. During this time, North and South Korea are set to reunify. However, the members of IRIS are intent on preventing the reunification. They attack a local mall and take hostages so that they can blackmail both sides of the Korean government and to threaten SK's president into announcing their political stand to not unite with NK. Hyun-jun becomes the negotiator for the president Cho Myung-ho (Lee Jung-gil) and for the hostages' release. Eventually, Sa-woo is killed. With the obstacles to the reunification process removed, the peace talks resume.

At the reunification summit, the president personally requests Hyun-jun to be at his side. Concurrently, NSS agents realize they have been duped: the presumed dead IRIS agents at the mall crisis were actually the hostages. The true IRIS agents escaped and infiltrated the summit to kill all delegates. IRIS agents kill and replace various security agents for a massacre. Fortunately, it fails due to Seung-hee's intervention. She pretends to be an IRIS agent and uses the confusion to stop them. This creates mass panic as IRIS agents make their stand against all security forces. Ultimately, the SK president and NK forces survive the assault and Hyun-jun saves the day again.

In the aftermath, Hyun-jun and Seung-hee leave NSS for a normal life. While Seung-hee waits at a lighthouse for Hyun-jun, he drives up to meet her and propose. However, during the drive, Hyun-jun is shot in the head by a sniper. He dies while looking at Seung-hee at a distance away at the lighthouse, unbeknownst to her.

[About:]
Iris is a 2009 South Korean espionage television drama series, starring Lee Byung-hun, Kim Tae-hee, Jung Joon-ho, Kim Seung-woo, Kim So-yeon and T.O.P (Choi Seung-hyun) of Big Bang. The plot revolves around two best friends from the 707th Special Mission Battalion recruited into a secret South Korean black ops agency known as the National Security Service. As the two friends find their loyalties tested and forge new, unlikely alliances, the journey takes them from their home country to Hungary, Japan, and China where they find themselves at the center of an international conspiracy. It aired on KBS2 from October 14 to December 17, 2009, on Wednesdays and Thursdays at 21:55 for 20 episodes.

With a budget in excess of 40 billion won (34 million USD), Iris along with its spin-off Athena: Goddess of War, share the record for the most expensive Korean dramas ever produced. The series was a critical and commercial success, with an average viewership of over 30% in addition to ranking as the top program consistently every week after its debut. The series also took home many of the highest honors at the 2009 KBS Drama Awards, including the Daesang Award for Lee Byung-hun.