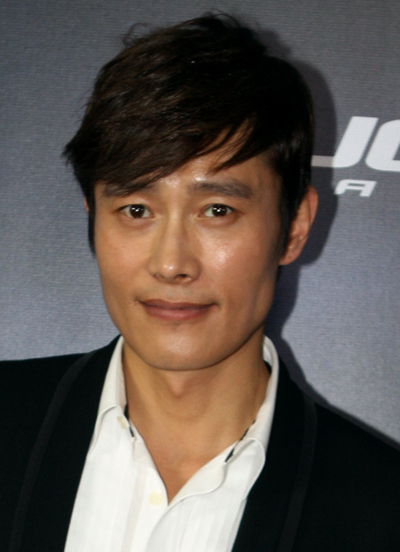 Lee, along with Ahn Sung-ki, are the first Korean actors to imprint their hand and foot prints on the forecourt of Grauman's Chinese Theatre in Hollywood, Los Angeles.

Lee made his debut in the television drama Asphalt My Hometown after auditioning in a KBS talent audition in 1991. He continued to act in a string of various television dramas until he made his big breakthrough in 2000 with Joint Security Area directed by Park Chan-wook. The film broke the box office record and became the highest grossing Korean film at the time. Lee played a border-guard soldier and won Best Actor at the Pusan Film Critics Awards for the role.

In 2001, his popularity continued to climb when he played the lead alongside Choi Ji-woo in the melodrama Beautiful Days. In 2003 he received the Grand Prize at the SBS Drama Awards and Best Actor at the Baeksang Arts Awards for his role in the poker drama All In.

From 2005 he focused on film, earning critical acclaim for his performance in A Bittersweet Life directed by Kim Ji-woon which was screened out of competition at the Cannes Film Festival. Lee was nominated for Best Actor at the Blue Dragon Film Awards and Grand Bell Awards, and won at the Chunsa Film Art Awards, Baeksang Arts Awards and the Korean Association of Film Critics Awards.

He reunited with director Kim Ji-woon in The Good, the Bad, the Weird, taking on his first villain role. The film was screened out of competition at the Cannes Film Festival. The following year he appeared in I Come with the Rain opposite American actor Josh Hartnett and Japanese actor Takuya Kimura. He then made his Hollywood debut as Storm Shadow in G.I. Joe: The Rise of Cobra, also starring Channing Tatum and Sienna Miller.

Lee dated his All In co-star Song Hye-kyo; they broke up in 2004. In his spare time, Lee Byung-hun practices taekwondo.

Lee married actress Lee Min-jung on August 10, 2013 at the Grand Hyatt Seoul. The couple had briefly dated in 2006, then resumed their relationship in 2012.