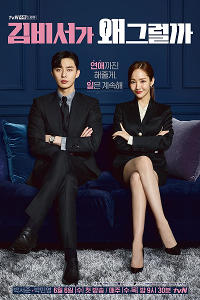 Lee Young-joon (Park Seo-joon) is the vice-chairman of a major corporation. His world is shaken when, one day, his highly-capable secretary, Kim Mi-so (Park Min-young), announces that she will resign from her position after working for Lee Young-joon for nine years. Young-joon then decided to do whatever he can after talking to his best friend, who happens to be a Board Director in his company, to make sure Mi-so stays by his side.

[About:]
What's Wrong with Secretary Kim is a 2018 South Korean television series starring Park Seo-joon and Park Min-young. It is based on the novel of the same title by Jung Kyung-yoon which was first published in 2013, which was then serialized into a Webtoon comic by KakaoPage in 2015. The series aired on tvN from June 6 to July 26, 2018, on Wednesdays and Thursdays for 16 episodes.