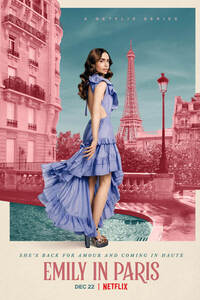 Emily in Paris follows Emily, a driven 20-something American from Chicago who moves to Paris for an unexpected job opportunity. She is tasked with bringing an American point of view to a venerable French marketing firm. Cultures clash as she adjusts to the challenges of life in Paris while juggling her career, new friendships and love life.

[About:]
Emily in Paris is an American-French comedy-drama streaming television series created by Darren Star, which premiered on Netflix on October 2, 2020. The series stars Lily Collins as the eponymous Emily, an American who moves to Paris to provide an American point of view to Savoir, a French marketing firm. There, she struggles to succeed in the workplace while searching for love and experiencing a culture clash with her "boring" and mundane Midwestern U.S. upbringing. It also stars Ashley Park, Philippine Leroy-Beaulieu, Lucas Bravo, Samuel Arnold, Camille Razat, and Bruno Gouery.

In November 2020, the series was renewed for a second season by Netflix and filming started in May 2021. The second season is scheduled to premiere on December 22, 2021.