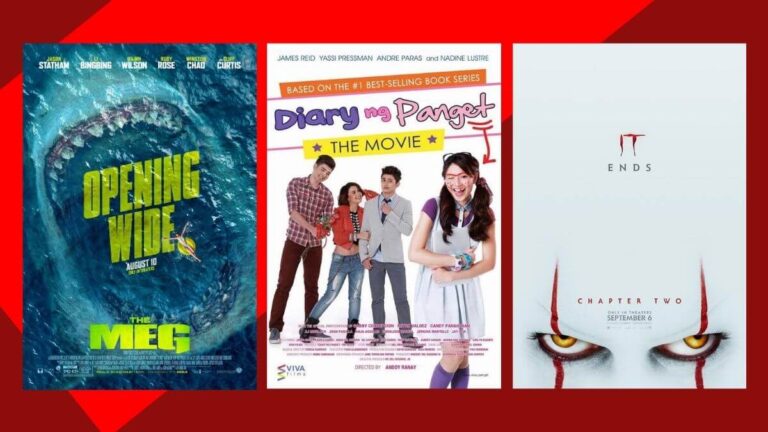 Isn’t it a bummer when you see your favorite movie already playing halfway through when you turn on the TV? Fret not! From rom-com and action to horror and thriller, we’re giving you a heads up on all the must-watch movies on TV from August 17 to 23, 2020.

1. Diary Ng Panget
(3:15pm, PBO)
A poor young woman becomes a personal maid for a rich and handsome young man. The two do not get along at first, but as their lives become entangled, their relationship becomes more complicated.

3. Finding Nemo
(5:15pm, HBO)
After his son gets abducted from the Great Barrier Reef and is dispatched to Sydney, Marlin, a meek clownfish, enlists the help of a forgetful fish and embarks on a journey to bring him home.

4. Mission Impossible III
(6:55pm, HBO)
IMF agent Ethan Hunt is called out of retirement to rescue one of his students and confront Owen Davian, a ruthless arms dealer, who has kidnapped Julia Meade, Ethan’s wife.

5. 22 Jump Street
(7:05pm, FOX Movies)
Schmidt and Jenko, two undercover cops, are sent on a mission to a college to investigate the use of a recreational drug known as WHYPHY. Their bond is tested when Schmidt befriends a girl, Maya.

1. Polaroid
(5:20pm, FOX Movies)
High school loner Bird Fitcher finds a vintage Polaroid camera that holds dark and mysterious secrets. She soon realizes that those who get their picture taken by it meet a tragic and untimely death.

2. Troy
(7:15pm, HBO)
After Paris, a prince of Troy, has an affair with Menelaus’s wife, Helen, he decides to take her with him. Later, Menelaus’s brother uses that as an excuse to wage war against the city of Troy.

3. Babe, I Love You
(9:30pm, PBO)
A wealthy architecture professor falls in love with a working-class woman who works as a promo girl.

1. Captain America: The First Avenger
(11:15am, HBO)
During World War II, Steve Rogers decides to volunteer in an experiment that transforms his weak body. He must now battle a secret Nazi organisation headed by Johann Schmidt to defend his nation.

2. Iron Man 2
(3:40pm, FOX Movies)
Tony Stark is under pressure from various sources, including the government, to share his technology with the world. He must find a way to fight them while also tackling his other enemies.

3. Alone/Together
(5pm, Cinema One)
It follows the love story of Christine and Raf, who cross paths again eight years after they first met during their college years.

4. Taken 2
(9pm, HBO)
Bryan Mills, a former CIA agent, and his ex-wife, Lenore, are taken hostage by a ruthless gang in Albania. However, his daughter Kim helps Bryan break free and rescue Lenore.

1. Seven Sundays
(7:15pm, PBO)
Siblings reunite when their father is diagnosed with cancer, and must settle old issues as they spend time together.

2. Thor: The Dark World
(9pm, FOX Movies)
Thor sets out on a journey to defeat Malekith, the leader of the Dark Elves when he returns to Asgard to retrieve a dangerous weapon and fulfill his desire of destroying the Nine Realms.

3. The Meg
(9:50pm, HBO)
When the members of an underwater research facility are under threat owing to a 75 feet prehistoric shark, Jonas Taylor, a deep sea diver, is hired to save them.

1. Gone Girl
(11:55am, Cinemax)
Nick Dunne discovers that the entire media focus has shifted on him when his wife Amy Dunne disappears on the day of their fifth wedding anniversary.

2. Life of Pi
(4:55pm, HBO)
Pi Patel finds a way to survive in a lifeboat that is adrift in the middle of nowhere. His fight against the odds is heightened by the company of a hyena and a male Bengal tiger.

4. It: Chapter 2
(10:55pm, HBO)
After 27 years, the Losers Club receive a call from their friend Mike Hanlon that Pennywise is back. They decide to honour their promise and return to their old town to end the evil clown for good.

1. Guardians of the Galaxy Vol. II
(11:30am, Cinemax)
After a successful mission, Quill and his team of galactic defenders meet Ego, a man claiming to be Quill’s father. However, they soon learn some disturbing truths about Ego.

2. Godzilla: King of the Monsters
(6:50pm, HBO)
The members of Monarch, an crypto-zoological organisation, must rely on the Godzilla and Mothra to defeat King Ghidorah and Rodan, after the former awakens other dormant Titans to destroy the world.

3. The Pacifier
(7:20pm, FOX Movies)
Shane Wolfe, a Navy SEAL, fails to rescue a government scientist, Howard Plummer, from Serbian rebels. Later, he is assigned to protect Plummer’s children from his enemies.

1. My Only U
(5pm, Cinema One)
A man does everything he can to help the woman he loves.

2. Mission Impossible: Ghost Protocol
(6:50pm, HBO)
When the IMF is wrongly accused of bombing the Kremlin, Ethan and his team race against time to find the real culprits and clear the reputation of their organisation.

3. Star Wars: The Force Awakens
(9pm, FOX Movies)
Thirty years after the defeat of the Galactic Empire, Han Solo and his young allies face a new threat from the evil Kylo Ren and the First Order.

4. Baby Driver
(11:45pm, HBO)
Doc forces Baby, a former getaway driver, to partake in a heist, threatening to hurt his girlfriend if he refuses. But the plan goes awry when their arms dealers turn out to be undercover officers.