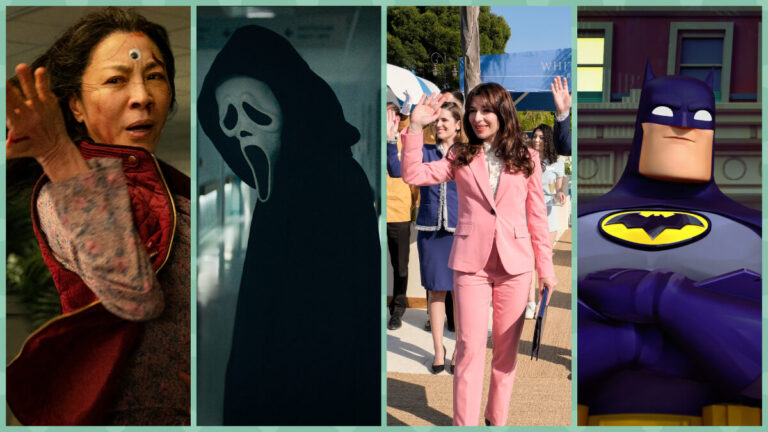 Check out the exciting titles coming to HBO GO this month!

This month, catch the premiere of the critically acclaimed film Everything Everywhere All at Once starring Michelle Yeoh, the 2022 instalment of Scream, Fantastic Beasts: The Secrets of Dumbledore and the second season of sci-fi comedy series Avenue 5 on HBO GO. Meet the crime-fighting vehicles of Batwheels and celebrate Wonder Woman Day on Cartoon Network and HBO GO. Also on Warner TV, catch The Winchesters Season 1 and Kung Fu Season 3.

Go beyond the ordinary on HBO and HBO GO

Fantastic Beasts: The Secrets of Dumbledore
Premieres Saturday, October 1 at 9pm on HBO

In this third instalment of the Fantastic Beasts series, Professor Albus Dumbledore entrusts Magizoologist Newt Scamander to lead an intrepid team of wizards, witches and one brave Muggle baker on a dangerous mission, where they encounter old and new beasts and clash with Dark wizard Gellert Grindelwald’s growing legion of followers. But with the stakes so high, how long can Dumbledore remain on the side-lines? Stars Eddie Redmayne, Jude Law and Mads Mikkelsen.

Everything Everywhere All at Once
Premieres Saturday, October 8 at 10pm on HBO and HBO GO

Directed by Daniel Kwan and Daniel Scheinert, the film is an irreverent and big-hearted sci-fi action adventure about Evelyn Wang, a flustered Chinese American mother who is contacted from a parallel universe and told that only she can save the world. The unlikely hero learns to channel her new-found powers and fight through the splintering timelines of the multiverse to save her home, family and herself. Stars Michelle Yeoh, Stephanie Hsu, Ke Huy Quan, Jenny Slate, Harry Shum Jr., James Hong and Jamie Lee Curtis.

Avenue 5 Season 2
Premieres Tuesday, October 11 at 10am on HBO and HBO GO

Twenty-five years after a streak of brutal murders shocked the quiet town of Woodsboro, a terrifying new killer resurrects the Ghostface mask and begins targeting a group of teenagers to resurrect secrets from the town’s deadly past. Now, only Sidney Prescott, former sheriff Dewey Riley, and reporter Gale Weathers can find a way to stop the killer when everyone is a suspect. Stars Neve Campbell, Courteney Cox and David Arquette.

The White Lotus Season 2
Premieres Monday, October 31 at 9am on HBO and HBO GO

Armed with martial arts skills and Shaolin values, San Francisco native Nicky Shen continues to protect her family and community with the help of her siblings, ex-boyfriend and new love interest, while searching for the ruthless assassin who killed her Shaolin mentor and is now targeting her. Stars Olivia Liang, Tzi Ma, Shannon Dang, Eddie Liu and Singaporean actress Kheng Hua Tan.

In this prequel of the hit series Supernatural, Dean Winchester narrates the epic, untold love story of John Winchester and Mary Campbell, who put it all on the line to not only save their love, but the entire world. They join forces with young hunter in training Latika and easy-going hunter Carlos to uncover the hidden truths about their families. Stars Jensen Ackles, Drake Rodger, Meg Donnelly, Nida Khurshid, Jonathan “Jojo” Fleites, Demetria McKinney and Bianca Kajlich.

Secret Origin of the Batwheels
Premieres Sunday, October 16 at 8:30am on Cartoon Network and HBO GO

Batwheels Season 1
Premieres Saturday, October 22 at 8:30am on Cartoon Network and HBO GO

Wonder Woman Day
On Friday, October 21 on HBO GO and from 5:45pm on Cartoon Network