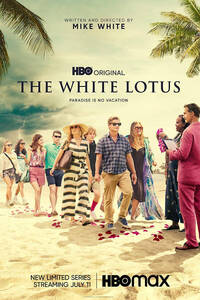 Comedy, Drama
Be the first to rate this

The series details a week in the life of vacationers as they relax and rejuvenate in paradise. With each passing day, a darker complexity emerges in these picture-perfect travelers, the hotel's cheerful employees, and the idyllic locale itself.

[About:]
The White Lotus is an American satirical comedy-drama television series created, written, and directed by Mike White that premiered on HBO on July 11, 2021. The series was greenlit in October 2020, filmed in Hawaii in late 2020, and features an ensemble cast including Murray Bartlett, Connie Britton, Jennifer Coolidge, Alexandra Daddario, Jake Lacy, Natasha Rothwell, Sydney Sweeney, Steve Zahn, and Molly Shannon. The first season, consisting of six episodes, concerns the lives of the staff and guests at a tropical resort in Hawaii. Following its critical acclaim and viewership numbers, the show was renewed as an anthology series, which will tell the story of a different group of travelers during their stay at another White Lotus property.