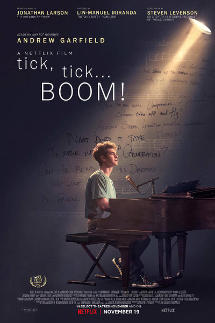 tick, tick…BOOM! is the movie adaptation of the autobiographical musical by Jonathan Larson, who’s most famous for creating the musical Rent. It’s set in 1990 New York City and centers on a young theater composer named Jon, who waits tables at an NYC diner all while writing what he hopes will be “the next great American musical.” Days before his showcase performance, he feels the pressure from people all around him, and he finds himself at a crossroads, asking himself what he’s meant to do with the time he has. The film shows the 30-year-old artist as he navigates love, friendship, and the pressures of life in New York City. It stars Andrew Garfield, Alexandra Shipp, Robin De Jesus, Vanessa Hudgens, and more.