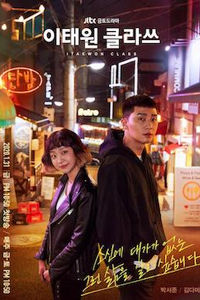 In 2006, high schooler Park Sae-Ro-Yi (Park Seo-Joon) was jailed for 2 years after attempting to kill Jang Geun-Won (Ahn Bo-Hyun). Geun-Won is the son of Jang Dae-Hee (Yoo Jae-Myung) and heir to the Jangga Group (Korea’s largest food corporation). Because of the Jang's influential power, Geun-Won leads a spoiled life and is able to bully people with impunity. Park Sung-Yeol (Son Hyun-Joo), Saeroyi's father, worked for Jangga and sponsored Oh Soo-A's (Kwon Na-Ra) education. Saeroyi had a scuffle with Geun-Won because he bullied Lee Ho-jin, Saeroyi defended Ho-Jin by hitting Geun-Won; it got Saeroyi expelled. Sung-Yeol supported his son and resigned from Jangga; father and son would try to open a bar to restart their lives. One night, Geun-Won irresponsibly crashed and killed Sung-Yeol, but Dae-Hee had someone else take the fall; Saeroyi tried to kill Geun-Won for his father but Soo-A (classmate and first love) stopped him. He was arrested and tried guilty for attempted murder and assault. Dae-Hee always offered mercy if Saeroyi kneeled, but he refused out of principle. Motivated to get revenge, he survived his sentence and vowed for vengeance. [cont.]

[About:]
Itaewon Class is a 2020 South Korean television series starring Park Seo-joon, Kim Da-mi, Yoo Jae-myung and Kwon Nara. Based on the webtoon of the same name, it is the first series to be produced by the film distribution company Showbox. It aired on JTBC in Korea from January 31 to March 21, 2020, and is streaming worldwide on Netflix. The series won Best Drama Series at the 25th Asian Television Awards.