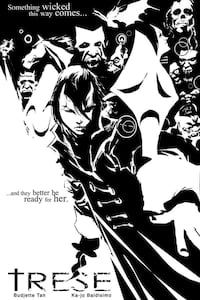 Alexandra steps in to protect the streets of Manila when the police can't deal with the supernatural weirdness that appears. Whenever she's needed, Trese arrives, often called in by Captain Guerrero, the Commissioner Gordon to Trese's unconventional Batman, a man who seems singularly predisposed to lean on her knowledge and specific skills. Supported by two mysterious and obviously magical creatures of uncertain powers – the always stylish Kambal, she's always there to protect Manila from supernatural threat.[20] Comparisons to Hellblazer and Vertigo were supplanted in this story with a familiar feel – this has the glorious scale and import of Ellis and Cassaday's Planetary, with Trese functioning as the spiritual and supernatural protector of Manila, delivering her world safe and sound, no matter what it takes, whilst we get to investigate alongside, all the weird and wonderful her mystical existence has to offer.[21] It fuses Philippine horror mythology with graphic storytelling and dark art in telling the story of Alexandra Trese, a detective who specializes in supernatural cases. [cont.]

[About]
Trese is a horror/crime black and white komik created by writer Budjette Tan and artist Kajo Baldisimo. It tells the story of Alexandra Trese, a detective who deals with crimes of supernatural origin.[1] The third book, Trese: Mass Murders, won Best Graphic Literature in the 29th National Book Award in November 2010;[2] the fourth, Trese: Last Seen After Midnight, was nominated for the Filipino Readers' Choice Award for Comics/Graphic Novels 2012;[3] the fifth, Trese: Midnight Tribunal, won the Filipino Readers' Choice Award for Comics/Graphic Novels 2013;[4] and Trese: Stories from the Diabolical was nominated for the Filipino Readers' Choice Award for Fictional Anthology 2014.[5] Manila Noir, an anthology containing Trese: Thirteen Stations, won the National Book Award for Best Anthology in English 2014,[6] while the sixth book, Trese: High Tide at Midnight, was a National Book Award Nominee for Graphic Literature in English 2015.[citation needed] The series is set to be adapted in 2021 as an animated series produced by Netflix[7] with Filipino-American Jay Oliva as Executive Director.[8] In 2020, Ablaze Publishing released the U.S. edition of the Trese: Murder on Balete Drive trade paperback.