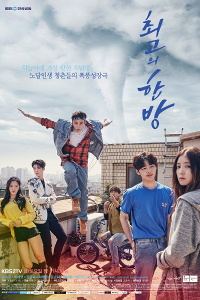 In the year 1993, pop idol Yoo Hyun-Jae accidentally travels through time to 2017. Discovering that he mysteriously disappears in 1994 and is presumed dead, he begins to investigate into the reason for his disappearance while trying to adjust to life in the future. Meanwhile, Lee Ji-Hoon is an aspiring musician and is secretly enrolled as an idol trainee at Star Punch Entertainment. Ji-hoon struggles to hide this from his parents, who believe he has been studying for his civil service exams.

Hit the Top is the first drama directed by Yoo Ho-jin, who directed the third season of variety show 2 Days & 1 Night; and the directorial debut of Cha Tae-hyun, who also co-starred.