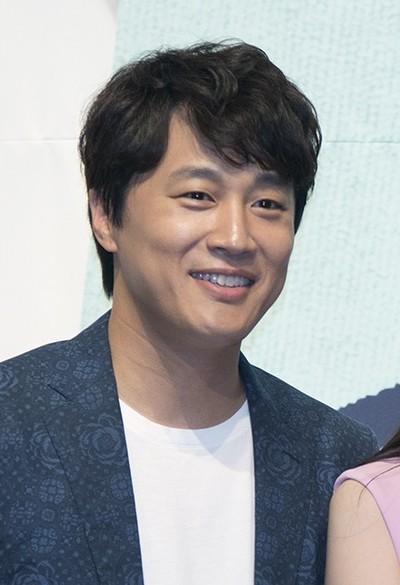 Cha Tae-hyun (born March 25, 1976) is a South Korean actor, singer, television personality and radio DJ. He is best known for his lead roles in the box-office hit comedies My Sassy Girl (2001), Scandal Makers (2008) and Hello Ghost (2010) as well as the television series Jeon Woo-chi (2012) and The Producers (2015). Since 2012, he is a cast member of the variety show 2 Days & 1 Night. He is a co-founder of the talent management agency Blossom Entertainment.

Cha's father is Cha Jae-wan, who was an assistant director for special effects at KBS, and his mother Choi Su-min, now retired, was a voice-over artist. His brother is film producer Cha Ji-hiyeon.

In June 1, 2006, Cha married his high school sweetheart, pop lyricist Choi Suk-eun. They dated for 13 years; she was his first and only girlfriend. They have three children, a son (Cha Soo-chan) and two daughters (Cha Tae-eun, Cha Su-jin).

In 2011, Cha revealed on SBS talk show Healing Camp, Aren't You Happy that he suffers from a panic disorder.

Cha Tae-hyun started his career as a silver medalist in a 1995 KBS Talent Contest. Over the next several years he would star in a large number of TV dramas such as Sunflower and Happy Together, while also appearing in numerous TV commercials. He was the radio DJ for KBS Cool FM's FM Popular Music with Cha Tae-hyun from 1999-2000, and made a minor film debut in the comedy Hallelujah.

Then in 2001 he burst onto the film scene through the hugely successful romantic comedy My Sassy Girl where he acted alongside his opposite Jun Ji-hyun. Cha's expressive acting established him as a recognized star in Korea as well as the Asian region at large, and he extended his fame by releasing his debut album Accident. His next film Lovers' Concerto (2002), a tragic melodrama with actresses Son Ye-jin and Lee Eun-ju, also proved to be a popular success.

From 2003, however, Cha's casting choices proved to be less inspired. He appeared in three comedies -- Crazy First Love, Happy Ero Christmas and Two Guys—that were widely criticized by audiences for their weak scripts and lack of creativity. He released his second album The Book later that year.

His 2005 films—the relationship film Sad Movie with an all-star ensemble cast, and melodrama My Girl and I opposite Song Hye-kyo, the remake of Japanese hit film Crying Out Love in the Center of the World—were box office disappointments. 2007's Highway Star, in which he played a masked trot singer, was a moderate success.

Cha hosted KBS Cool FM's Mr. Radio from 2007-2008, and was awarded Best Radio DJ at the 2007 KBS Entertainment Awards alongside Ahn Jae-wook. He then portrayed the town's jester who has the intelligence of a six-year-old in BABO (which means "fool" in Korean), a film adaptation of Kang Full's popular online comic.