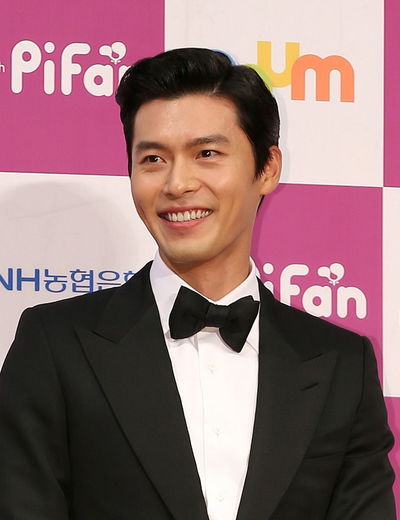 Hyun debuted as an actor in the 2003 television series Bodyguard. He then starred in the sitcom Nonstop 4 and quirky romance drama Ireland, and made his film debut the same year in the youth sports movie Spin Kick. Hyun shot to stardom with the 2005 romantic comedy series My Lovely Sam Soon with Kim Sun-a. Sam-soon was a massive hit with average ratings of over 37% and 50.5% for the finale, for which Hyun won the Top Excellence Award at the MBC Drama Awards.

Following the success of Sam-soon, Hyun starred in his first film as a lead actor in A Millionaire's First Love (written by internet novelist Guiyeoni). The movie was a hit among teenage audiences.

However, Hyun's next television project The Snow Queen failed to be successful. He began choosing more eclectic projects, such as 2008's Worlds Within, which was well-received for Noh Hee-kyung's writing. He then starred in romance film I Am Happy, which was the closing film at the 2008 Busan International Film Festival. In 2009, Hyun drew critical acclaim in his portrayal a sociopath in the gangster saga Friend, Our Legend, reportedly watching Kwak Kyung-taek's original film 20 to 30 times.

Hyun experienced a resurgence of fame in 2010 with Secret Garden, a romantic fantasy drama written by Kim Eun-sook. The drama brought in 30% ratings and garnered much interest regarding its fashion, catchphrases and music. Hyun was recognized at the 2010 SBS Drama Awards and the 47th Baeksang Arts Awards for his stellar performance. He also contributed to the soundtrack of the drama with "That Man", which peaked at number one in eight Korean music portals.

In 2011, Hyun starred in two films; Come Rain, Come Shine (a minimalist breakup indie directed by Lee Yoon-ki); and Late Autumn (directed by Kim Tae-yong). Shot in Seattle, Late Autumn was an English-language remake of the 1966 Lee Man-hee classic, in which Hyun played a man on the run who falls in love with a woman who is on special leave from prison (Chinese actress Tang Wei). It became the highest grossing Korean film released in China to date, taking in more than US$9.5 million over two weeks, which was unprecedented for a melodrama. He received a good review from The Hollywood Reporter which stated, "It is Hyun who impresses more for not underplaying the dandy, narcissistic side of his personality."

Hyun walked the red carpet at the 61st Berlin International Film Festival where the two films screened. He described the honor as his "happiest achievement."

After the merger of their former agency AM Entertainment with SM Entertainment, Hyun's reps announced in November 2012 that the actor and Shin Min-ah had decided to go independent and set up their own management agency O& Entertainment. Hyun then spent most of 2013 shooting commercials as an in-demand product endorser, and holding fan meetings all over Asia.

For his acting comeback after military service, Hyun chose The Fatal Encounter, his first ever period film, in which he played the leading role of King Jeongjo who faced fierce party strife and assassination attempts during his reign. It was released in April 2014 and drew more than 3 million admissions. However, Hyun was criticized for his flat tonation and lack of emotions in the film; which received mostly negative reviews.

Hyun next starred in Hyde, Jekyll, Me, a 2015 romantic series in which he plays a man with split personality disorder (inspired by the literary character) whose two personas both fall for the same woman. However, the drama was a commercial flop and recorded low ratings.

In January 2016, Hyun set his own agency VAST Entertainment.

Hyun then returned to silver screen with the action-thriller film titled Confidential Assignment (2017), where he plays the role of a North Korean detective that is secretly sent to South Korea to apprehend a crime ring that is made up of North Korean traitors. The film was a success, and Hyun received positive reviews for his action scenes and comedic performance. He then starred in a crime action film The Swindlers, along with Yoo Ji-tae, about a prosecutor who plans to catch a con man who has swindled a large sum of money. The Swindlers was another box office hit for Hyun.

In 2018, Hyun starred in crime thriller The Negotiation; and zombie blockbuster Rampant. The same year, he confirmed his return to the small screen with fantasy melodrama Memories of the Alhambra alongside Park Shin-hye.

Hyun was born and raised in Seoul. He has one older brother. He graduated from Chung-Ang University in 2004, where he majored in Theater Studies. In 2009, he enrolled at the same university to obtain a Master's degree.

On March 7, 2011, Hyun volunteered to serve his 21 months of compulsory military service in the Marine Corps, considered the toughest service branch. He was discharged on December 6, 2012 and received a citation for being an exemplary soldier.