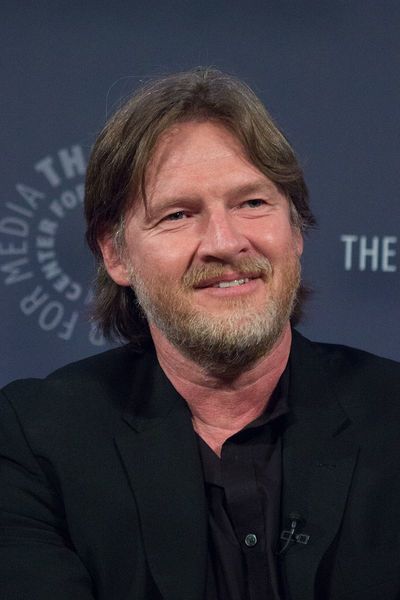 Donal Francis Logue (born February 27, 1965 or 1966) is a Canadian-American film and television actor, producer and writer. His notable roles include starring in the film The Tao of Steve, Sons of Anarchy, Vikings, the sitcom Grounded for Life, the television series Copper and the detective series Terriers. He stars as detective Harvey Bullock in Fox's Gotham and had a recurring role in NBC's Law & Order: Special Victims Unit as Lt. Declan Murphy.

After a few TV movies, Logue first appeared in film playing Dr. Gunter Janek in the 1992 film Sneakers. In 1993, he portrayed Capt. Ellis Spear in Gettysburg. In 1993, he guest starred on the Northern Exposure episode "Baby Blues" playing a movie script agent, Judd Bromell. Logue appeared as an FBI agent in The X-Files episode "Squeeze." Logue's character Jimmy The Cab Driver was a staple of MTV promos in the early 1990s. He also appeared in Blade and The Patriot, in 2000. He appeared in two of Edward Burns films: Purple Violets and The Groomsmen.

Logue's portrayal as the lead in The Tao of Steve won him a Special Grand Jury Prize for best actor at the 2000 Sundance Film Festival, and was noticed by ER producer John Wells, who cast Logue in several episodes as Chuck Martin, a nurse Dr. Susan Lewis marries one weekend in Las Vegas on a whim, and later has a child with. Concurrent with the run on ER, Logue starred in the critically acclaimed comedy Grounded for Life. In December 2005, Logue had a pilot development deal for a new situation comedy on ABC television, originally titled I Want to Rob Mick Jagger. The pilot was picked up and debuted in the winter of 2006 under the name The Knights of Prosperity. The show disappeared from the ABC lineup in early March 2007.

Logue also appeared in a supporting role in Just Like Heaven (2005). Logue had appeared as Phil Stubbs in the original pilot for the NBC show Ed, but dropped out to star in the sitcom Grounded for Life. The first two and a half seasons of Grounded for Life were telecast on the Fox network; thereafter, the show moved to The WB for the remainder of its run. In 2002 and 2003, Logue appeared on the VH1 "I Love. . ." series instalments '80s, '70s, and '80s Strikes Back. In 2010, Logue appeared on House, M.D. as millionaire patient Curtis Harry.

Logue also appeared in NBC's The Dennis, in 2005, about a former child prodigy whose parents kick him out of the house and into the real world. It was not picked up, however. Logue co-starred with Nicolas Cage in the movie Ghost Rider, the David Fincher film Zodiac, and alongside Mark Wahlberg in the 20th Century Fox film Max Payne. In 2008, Logue appeared in the Jack Kerouac documentary One Fast Move or I'm Gone: Kerouac's Big Sur. Logue starred as Captain Kevin Tidwell in the NBC crime drama Life from 2008–2009. On May 4, 2009, NBC announced Life would not be returning for a third season.

Logue starred in FX series Terriers which was cancelled due to low ratings, even with great reviews from the press such as the Times. Logue starred as the main character in Theory of a Deadman's music video for the song "Lowlife," off their 2011 release, The Truth Is....

In late 2012, Logue joined the casts of Sons of Anarchy as renegade ex-U.S. Marshal Lee Toric who is out for revenge for the murder of his sister and Vikings as King Horik. In 2013, he joined the cast of BBC America's show Copper as a returning Union General turned Tammany Hall insider, General Brendan Donovan, and he returned to Sons of Anarchy and Vikings to reprise his roles from the previous seasons. Logue had roles in two 2013: CBGB with Alan Rickman and 9 Full Moons with Amy Seimetz and Bret Roberts.

Between March and May 2014, he appeared in six episodes of the NBC police procedural, crime, legal drama, Law & Order: Special Victims Unit as Lieutenant Declan Murphy, a former undercover officer appointed as acting commander of the Special Victims Unit. Since 2014, he has portrayed Harvey Bullock in the police procedural series Gotham, based on the DC Comics Batman franchise.

In 2015, Logue appeared in Adam Massey's thriller film The Intruders.

Logue travels back and forth to Killarney, County Kerry, Ireland, where his mother lives, and holds both Irish and Canadian citizenship.

Logue has homes in Los Angeles and Oregon. When not acting, Logue is heavily involved in soccer, and regularly plays for the Los Angeles-based amateur team Hollywood United.

Logue has a Class-A Commercial Drivers License and is licensed to drive tractor-trailers with double or triple trailers, tankers and hazardous materials. He has a hardwood company with one partner called Frison-Logue Hardwood, and a trucking company called Aisling Trucking with two partners based out of Central Point, Oregon, which the three founded in 2012.

Logue was formerly married or in a long-term committed relationship with Kasey Walker, also known as Kasey Smith. They have a son named Finn, and a daughter, Jade, born Arlo, who is openly transgender. On June 27, 2017, Logue posted a tweet saying Jade had gone missing; he later deleted it and launched a wider public appeal for help after contacting police and the National Center for Missing and Exploited Children. As of July 8, Jade had been found in North Carolina and was returned home safely.