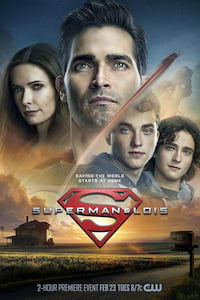 Clark Kent / Superman and Lois Lane return to Smallville with their sons Jonathan and Jordan, where they are reacquainted with Lana Lang, her husband Kyle Cushing, and their daughter Sarah, when their idyllic life is upended when The Stranger enters their lives.

[About:]
Superman & Lois is an upcoming American superhero drama television series developed for The CW by Todd Helbing and Greg Berlanti, based on the DC Comics characters Superman and Lois Lane, created by Jerry Siegel and Joe Shuster. Tyler Hoechlin and Elizabeth Tulloch star as the titular characters Clark Kent / Superman, a costumed superhero, and Lois Lane, a journalist for the Daily Planet. The series will be set in the Arrowverse, sharing continuity with the other television series of the franchise.

The series was announced in October 2019 and was ordered to series in January 2020. Filming began in October 2020 and is expected to conclude in June 2021. Superman & Lois is scheduled to premiere on February 23, 2021.