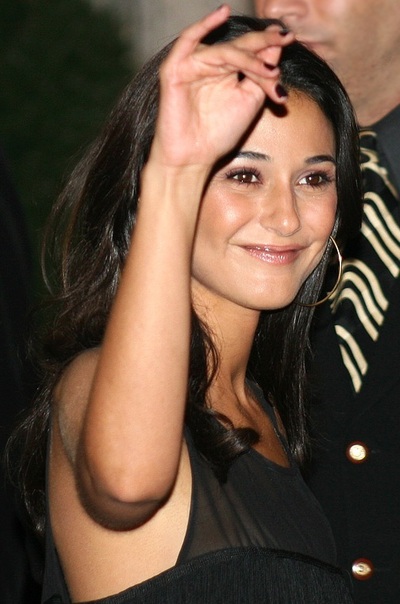 Emmanuelle Sophie Anne Chriqui (born December 10, 1977) is a Canadian film and television actress. She is best known for her performance on HBO's Entourage as Sloan McQuewick, as well as Dalia, the love interest of Adam Sandler's character in You Don't Mess with the Zohan. She is also known for her role on The Mentalist television series as Lorelei Martins, accomplice to Red John's. In May 2010, she topped the AskMen.com Most Desirable Women of 2010 list.

Chriqui was born in Montreal, Quebec, the daughter of Moroccan Jewish immigrants. Her mother, Liliane, was born in Casablanca, her father Albert in Rabat; and Chriqui has relatives in Israel. Her family practised Orthodox Judaism in the Sephardic tradition.

Chriqui has an older brother, Serge and an older sister, Laurence. When she was almost two, her family moved to Toronto, Ontario. She grew up in Markham—Unionville, a suburb northeast of the city. Her mother, an esthetician who once told Emmanuelle she would become an actress, died when Chriqui was very young.

As a child, she took acting classes, for which her brother paid. Chriqui attended the drama program at Unionville High School. After high school, Chriqui decided to pursue a career in acting.

Chriqui began acting as a 10-year-old in a McDonald's commercial. She moved to Vancouver in the mid-1990s, guest-starring in series such as Are You Afraid of the Dark?, Forever Knight, Once a Thief and Psi Factor: Chronicles of the Paranormal. Her first Hollywood role was as a supporting character in Detroit Rock City (1999). Chriqui later appeared in several movies, such as 100 Girls, Wrong Turn, On the Line and In the Mix. She played Eve in the 2005 comedy National Lampoon's Adam & Eve, and played Adam Sandler's love interest in the 2008 film You Don't Mess with the Zohan.

Chriqui was nominated for a Best Actress DVD Exclusive Award for her performance in 100 Girls and was nominated, with Lance Bass, for a Choice Liplock Teen Choice Award in On the Line. In April 2008, she won the Standout Performance Trophy at the Young Hollywood Awards.

Chriqui also starred in Hinder's "Lips of an Angel" music video as well as in the Zac Brown Band's "Whatever It Is" music video. She threw out the ceremonial first pitch at a Los Angeles Dodgers game on June 8, 2008. Chriqui was on the cover of the Autumn 2008 issue of Naked Eye.