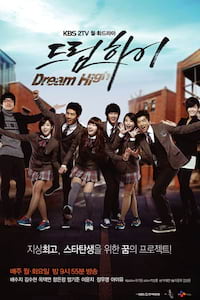 Six students at Kirin High School share dreams of becoming K-pop idols, among others. During their school years, they learn how to develop their singing, songwriting and dancing skills while undergoing personal growth. They also start to develop feelings for one another. Each of them has their own strengths and weaknesses, but they strive to debut with the support and guidance of one another.

The drama was popular among teenagers, and brought in average viewership ratings of 15.7% during its two-month run. A special episode, where the cast of the show performed the Dream High Special Concert on a stage near Seoul, was aired on March 1, 2011, the day after the series ended.

Its sequel Dream High 2 aired a year later with a different cast.