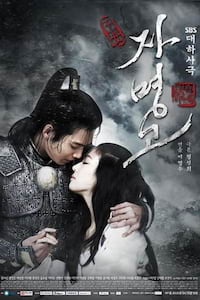 Ja-myung (Jung Ryeo-won) and Ra-hee (Park Min-young) were born on the same hour on the same day as half sisters. An oracle warns that one of two would save the Kingdom and the other would destroy it. Ja-myung survives an assassination attempt by her stepmother Wang Ja-shil (Lee Mi-sook), the ambitious mother of Ra-hee. She escapes to Shandong Province, and grows up a commoner, becoming a top artist. When she discovers her true identity, she returns to the royal court. To avoid renewed conflict over the right to the throne, Ja-myung stays at the shrine as a priestess. She creates the Ja-myunggo-gak system, where a magic war drum is placed, to defend the country from outside attacks. Ja-myung and Prince Hodong (Jung Kyung-ho) of the enemy state of Goguryeo fall in love, but Hodong, as an ambitious prince, marries Ja-myung's half sister, Princess Ra-hee, to manipulate her into destroying the nation's defense system. Ra-hee, who is also in love with Hodong, eventually chose to tear down her country's war drum, becoming the traitor - and the princess of the prophecy. Princess Ja-myung, struggling to save her nation, pierces her beloved Hodong with her sword. He barely escapes death, but he realizes their fate; they cannot be together. As approaching soldiers come, he holds Ja Myung close to him and slides a sword through both of their bodies.