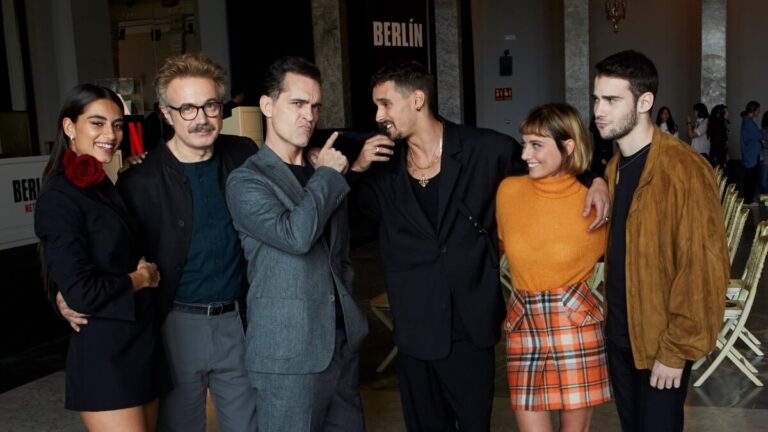 In this prequel, we join Berlin before he became part of the iconic Money Heist crew!

Netflix has officially introduced the cast of Berlin, the upcoming spinoff series of La Casa de Papel or Money Heist. At a recent press conference, the lead actor Pedro Alonso was joined by his co-stars and the show’s creators to finally reveal what the new series will be about, teasing a romantic spin on the series.

“Berlin’s character has the most sparkling personality to place it in another universe,” stated creators Esther Martínez Lobato and Álex Pina. “We loved the idea of introducing a new gang around Berlin in a completely different emotional state.”

Pina has also described the new series as “a trip through the golden age of the character, when he robbed around Europe crazy in love.” Furthermore, the co-creator teased that it will be “full of white-collar crimes, tension, travel, romance and, most interestingly, a sense of humor.”

In the prequel, the cunningly dangerous Berlin is joined by a different crew including the philanthropic professor Damián (Tristán Ulloa); the kamikaze who lives a risky life, Cameron (Begoña Vargas); Berlin’s faithful squire Roi (Julio Peña Fernández), and the relentless man of action Bruce (Joel Sánchez). Together, the gang pulls off a heist in Paris.

To further tease the series, Pedro Alonso also recited the opening of the script: “There are only ten things that can turn a terrible day into a wonderful one. The first is love. And the truth, that wasn’t the case. My third wife had just left me…The second is a spoil of more than ten million euros. But it wasn’t the case either. We were going to steal the link to a much bigger heist, today’s was easy. But if you have a bad day, you can end up bringing a miserable to his knees and aiming for his head.”

Berlin or Andrés de Fonollosa acts as a brother and close confidant to the Professor in Money Heist, and served as the leader of the crew from inside the Mint of Spain. Despite his intelligence and charm, Berlin had been in conflict with his fellow thieves due to his psychopathic tendencies. But while he had his share of villainy throughout the series, Berlin’s complexities and his final act of redemption made the character a fan favorite from the franchise.

Berlin is created by Pina and Lobato, with its eight episodes to be directed by Albert Pintó, David Barrocal, and Geoffrey Cowper. The series begins shooting on October 3 in Paris.