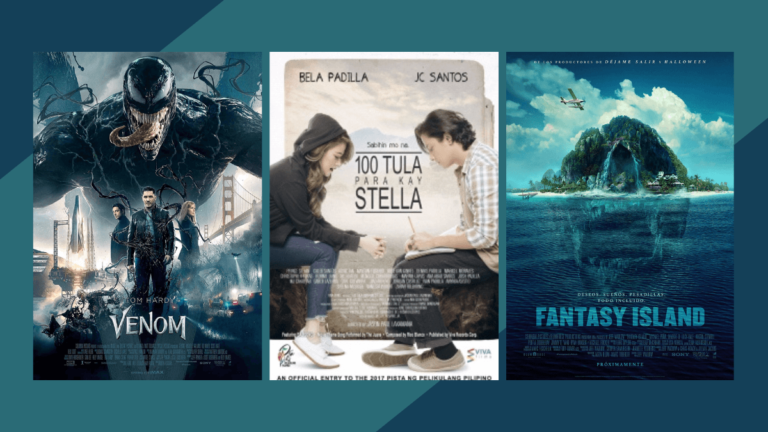 Isn’t it a bummer when you see your favorite movie already playing halfway through when you turn on the TV? Fret not! From rom-com and action to horror and thriller, we’re giving you a heads up on all the must-watch movies on TV from June 20 to 26, 2022.

Blumhouse’s Fantasy Island
(1:05pm, Cinemax)
The enigmatic Mr. Roarke makes the secret dreams of his lucky guests come true at a luxurious but remote tropical resort, but when the fantasies turn into nightmares, the guests have to solve the island’s mystery in order to escape with their lives.

Just The 3 Of Us
(7pm, Cinema One)
Strangers, forced by circumstance to live together, find love despite being polar opposites.

Mr. & Mrs. Cruz
(11am, PBO)
Raffy and Gela find themselves taking off for Palawan to escape the not so great realities of their current lives and catch up on their respective me-time. But as fate would have it, they find themselves meeting and enjoying each other’s company.

Coach Carter
(6:10pm, Cinemax)
In 1999, Ken Carter (Samuel L. Jackson) returns to his old high school in Richmond, California, to get the basketball team into shape. With tough rules and academic discipline, he succeeds in setting the players on a winning streak. But when their grades start to suffer, Carter locks them out of the gym and shuts down their championship season. When he is criticized by the players and their parents, he sticks to his guns, determined that they excel in class as well as on the court.

My Amnesia Girl
(7pm, Cinema One)
Apollo tries to undo his past mistakes with Irene when she gets amnesia and has no recollection of him, or that he left her at the alter.

Venom
(8:10pm, HBO)
Journalist Eddie Brock is trying to take down Carlton Drake, the notorious and brilliant founder of the Life Foundation. While investigating one of Drake’s experiments, Eddie’s body merges with the alien Venom — leaving him with superhuman strength and power. Twisted, dark and fueled by rage, Venom tries to control the new and dangerous abilities that Eddie finds so intoxicating.

In The Heights
(4:20pm, HBO)
In Washington Heights, N.Y., the scent of warm coffee hangs in the air just outside of the 181st St. subway stop, where a kaleidoscope of dreams rallies a vibrant and tight-knit community. At the intersection of it all is a likable and magnetic bodega owner who hopes, imagines and sings about a better life.

The Hunger Games
(11:20am, HBO)
In what was once North America, the Capitol of Panem maintains its hold on its 12 districts by forcing them each to select a boy and a girl, called Tributes, to compete in a nationally televised event called the Hunger Games. Every citizen must watch as the youths fight to the death until only one remain. District 12 Tribute Katniss Everdeen has little to rely on, other than her hunting skills and sharp instincts, in an arena where she must weigh survival against love.

Salt
(11:20am, Cinemax)
When Evelyn Salt became a CIA officer, she swore an oath to duty, honor and country. But, when a defector accuses her of being a Russian spy, Salt’s oath is put to the test. Now a fugitive, Salt must use every skill gained from years of training and experience to evade capture, but the more she tries to prove her innocence, the more guilty she seems.

One More Chance
(7pm, Cinema One)
A long-time couple seems destined for marriage, but frictions and differing ambitions break them apart. As they try to move on with their lives they are continually reminded of what they once had, and the temptation to go back is never far away.

The Mall, The Merrier
(9:30pm, PBO)
Two siblings fight for ownership of their parents’ mall.

You Changed My Life
(5:15pm, PBO)
Miggy and Laida settle into their lives as a couple, but their successful careers soon threaten to tear them apart.

Despicable Me
(6pm, HBO)
Supervillain Gru, a man who delights in all things wicked, hatches a plan to steal the moon. Surrounded by an army of little yellow minions and his impenetrable arsenal of weapons and war machines, Gru prepares to vanquish all who stand in his way. However, nothing in his calculations and groundwork has prepared him for his greatest challenge: three adorable orphan girls who want to make him their dad.

A Second Chance
(7pm, Cinema One)
After their storybook wedding, Popoy and Basha find married life and starting a business, more challenging than they ever imagined.

Finally Found Someone
(7pm, Cinema One)
When a woman is left at the altar, the video goes viral online, and a PR rep is hired to help her. In the end, they realize that they have fallen for each other.

San Andreas
(7:05pm, HBO)
A seemingly ideal day turns disastrous when California’s notorious San Andreas fault triggers a devastating, magnitude 9 earthquake, the largest in recorded history. As the Earth cracks open and buildings start to crumble, Ray Gaines, an LAFD search-and-rescue helicopter pilot, must navigate the destruction from Los Angeles to San Francisco to bring his estranged wife and their only daughter to safety.

Harry Potter and the Sorcerer’s Stone
(2pm, HBO)
Adaptation of the first of J.K. Rowling’s popular children’s novels about Harry Potter, a boy who learns on his eleventh birthday that he is the orphaned son of two powerful wizards and possesses unique magical powers of his own. He is summoned from his life as an unwanted child to become a student at Hogwarts, an English boarding school for wizards. There, he meets several friends who become his closest allies and help him discover the truth about his parents’ mysterious deaths.

The Panti Sisters
(3pm, Cinema One)
A father announces to his three homosexual sons that he’s dying of cancer, and offers up a $300 million inheritance if they give him grandchildren.

Harry Potter and the Chamber of Secrets
(4:30pm, HBO)
The second instalment of boy wizard Harry Potter’s adventures at Hogwarts School of Witchcraft and Wizardry, based on the novel by JK Rowling. A mysterious elf tells Harry to expect trouble during his second year at Hogwarts, but nothing can prepare him for trees that fight back, flying cars, spiders that talk and deadly warnings written in blood on the walls of the school.