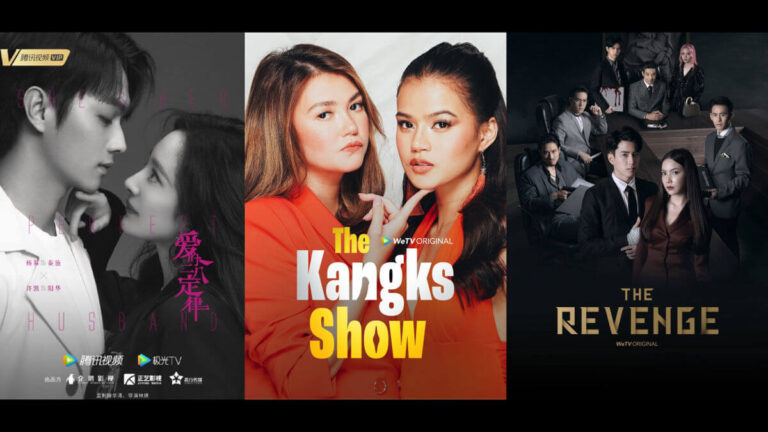 All your entertainment cravings - C-Dramas, P-Pop specials, and original series – at your fingertips!

As everyone slowly eases into 2022, great entertainment is a must to get through those busy days. WeTV has got all its bases covered with a whole slate of exciting shows perfect for binge-watching and chilling out at any time, and on any device.

The WeTV Thailand suspense drama series The Revenge follows the story of the Akarapisansakuls, a family whose history is mired in violence. When a mysterious woman enters their lives and begins turning them against each other, they need to do everything to keep the family from imploding. It is left up to Vee, an heir to the family legacy, to destroy the enemy. Except he is faced with an impossible choice – protecting his family or letting justice run its course. Stream new episodes of The Revenge every Monday and Tuesday.

P-pop fans are in for a treat with exclusive specials on SB19! Since they were launched three years ago, the guys have been riding this meteoric rise to the top of the charts powered by both talent and determination. WeTV had a front row seat to all the preparations for their recent anniversary concert held at the Araneta Coliseum. Calling on all A’Tin to show their support for SB19 and catch Kwentulitan With SB19, streaming soon on WeTV.

C-Drama fans are in for a treat with a whole lineup of new shows heading to the streamer very soon. Among the most anticipated is the romantic series She And her Perfect Husband. The story revolves around an ambitious young lawyer Qin Shi (Yang Mi) who joins a firm who favors married lawyers. She gets in because her brother changes her status to “married” in her application. Before she can admit to the truth, her “husband” Yang Hua (Xu Kai) makes an appearance. Will this deception lead to true love?

The fan-favorite series My Girlfriend Is An Alien, starring Wan Peng and Bie Thassapak Hsu, is all set to continue with season 2. Alien Ambassador Chai Xiao Qi has finally settled down here on Earth with her human boyfriend. When her alien partner suddenly arrives, her perfect life is turned upside down. Can they defend their love before she find herself forced to return to her planet. Binge watch Season 1 of My Girlfriend Is An Alien, one of the top C-Dramas of 2020, on WeTV before season 2
premieres soon.

For those in the mood for a crazy sexy show, then don’t miss WeTV’s highly-rated series The Kangks Show. The Angelica Panganiban-starrer has been one of the most-watched show on the streamer globally since its December premiere. It has also gotten rave reviews from fans, media and industry folks. New episodes drop on WeTV’s VIP tier every Wednesday, and on FREE every Friday.

Stay tuned to the WeTV Philippines social media accounts on Facebook and Instagram for exclusive updates on other WeTV Originals, the biggest P-pop concerts, and premium Asian content.

To stream the WeTV Originals and the very best in Asian Premium Content, Filipino shows and anime, just download the WeTV and iflix app from the App store and Google Play and start watching! A monthly subscription rings in at only P59, quarterly at P159, and an annual subscription is only P599 for recurring subscriptions, while a one-month pass is only P149.