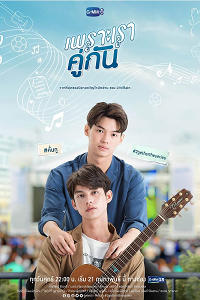 2gether: The Series is a 2020 Thai television series starring Metawin Opas-iamkajorn (Win) and Vachirawit Chiva-aree (Bright). An adaptation of the 2019 Thai novel of the same name by JittiRain, the series follows the love story of two college boys who start from being in a fake romantic relationship and later developing into a real couple.

The series is scheduled to be available for streaming on 30 July 2020 on Netflix.

Tine (Metawin Opas-iamkajorn) has a gay admirer in his university named Green (Korawit Boonsri). To get Green to leave him alone, his friends convince him to make Sarawat (Vachirawit Chiva-aree), a popular and attractive guitarist and soccer player, his fake boyfriend. After his first attempt fails, Tine joins the music club, where Sarawat is a member. Eventually, Sarawat agrees to Tine's offer but comes to a point where he wonders when their fake relationship will end. The ambiguity of their relationship later leads to a conflict between Tine and Sarawat.