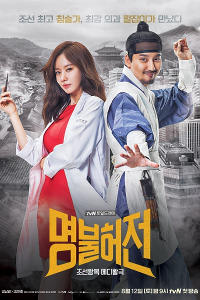 Heo Im (Kim Nam-gil) is a Joseon doctor of Traditional Korean medicine, specializing in acupuncture. He worked at the clinic for the poor during daytime and earned a fortune by making secret visits to nobles and high-ranking officials' houses at night. After gaining notoriety for his great skills, he was tasked to help treat the king's migraines. Unfortunately, his anxiety got the best of him and he was charged with treason. Unwilling to accept jail, he escaped capture but was chased by soldiers. He was eventually cornered into a river and fatally shot by arrows and fell to his supposed death. Death never came and he awakened in modern Seoul-Korea and realizes he has somehow time traveled. Lost and confused, he runs into Choi Yeon-kyung (Kim Ah-joong), a cardiothoracic fellow surgeon at Shinhae Hospital and began an unlikely relationship between time and space.

[About:]
Live Up to Your Name is a 2017 historical time travel South Korean television series. It brings Heo Im (a medical scientist from the Joseon Dynasty portrayed by Kim Nam-gil) to present day Seoul, where he meets the surgeon, Choi Yeon-kyung (Kim Ah-joong). The series marks Kim Nam-gil's small screen comeback after four years. It aired on tvN from August 12 to October 1, 2017 at 21:00 (KST).

Its final episode recorded a 6.907% nationwide audience share according to Nielsen paid platform making the episode one of the highest rated in Korean cable television history.