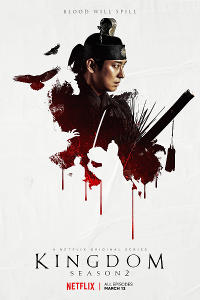 Set during Korea's Joseon period, three years after the Japanese invasions of Korea, the first season depicts the story of Crown Prince Lee Chang (Ju Ji-hoon), who stumbles across a life-threatening political conspiracy while investigating the spread of a mysterious plague. The second season continues to depict Lee Chang's struggle to save his people from the spread of the plague, which is later revealed to have adapted to the colder season, and his dynasty from the machinations of the powerful Haewon Cho clan.

[About:]
Kingdom is a 2019 South Korean television series written by Kim Eun-hee and directed by Kim Seong-hun. It will be Netflix's second Korean original series, and is to premiere on January 25, 2019 The series will have two seasons, with the second season set to go into production in February, 2019.

The series is adapted from the webcomic series "Land of the Gods", which was authored Writer Kim Eun-hee, her first venture into the webcomic industry, and drawn by Yang Kyung-il.

Set in Korea’s medieval Joseon period, it tells the story of a crown prince who is sent on a suicide mission to investigate a mysterious plague that’s spreading across his country. The truth threatens the kingdom, when he discovers that it is an atrocious epidemic in the form of zombies.