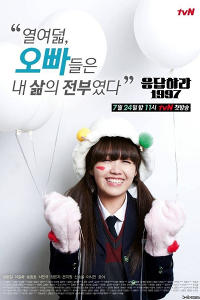 Reply 1997 is a 2012 South Korean television series that centers on the lives of six friends in Busan, as the timeline moves back and forth between their past as 18-year-old high schoolers in 1997 and their present as 33-year-olds at their high school reunion dinner in 2012, where one couple will announce that they're getting married. As the first installment of the Reply series, it also portrays the extreme fan culture that emerged in the 1990s when first generation idol groups such as H.O.T. and Sechs Kies took center stage and K-pop was just beginning to blossom.

The last episode recorded the highest ratings at the time for a Korean cable drama, and the series has garnered praise from audiences and critics for being well-researched, refreshing, genuine, and full of humor and heart

Set in the 1990s, "Reply 1997" follows female high-school student Sung Shi-won (Jung Eun-ji), who idolizes boyband H.O.T and her 5 high school friends. As a teen, Shi-won was obsessed with a boy band. Now 33 years old, Shi-won and her friends are reviving their memories at their school reunion.