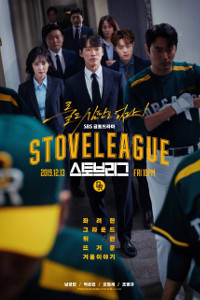 The Dreams are a Korean professional baseball team that have placed last in the league for the past four seasons. When their general manager steps down, the team hires Baek Seung-soo, who has managed several championship winning sports teams, as his replacement, despite Seung-soo having zero experience with managing a baseball team. Facing shrinking budgets, infighting between the coaching staff and a team deeply set in their ways, Seung-soo uses his outsider's insight and the help of operations manager Se-young and Jae-hee to upend the Dreams' culture in a bid to create a championship winning team, despite the looming fact that every team he has managed before has folded after winning the championship.

[About:]
Hot Stove League is a 2019 South Korean television series starring Namkoong Min, Park Eun-bin, Oh Jung-se and Jo Byung-gyu. It aired on SBS from December 13, 2019 to February 14, 2020. The series received critical acclaim and won Best Drama at the 56th Baeksang Arts Awards. It became available for streaming on Netflix from October 23, 2020.