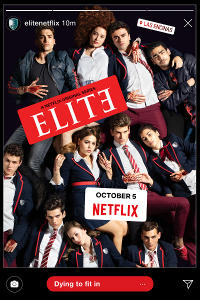 Crime, Drama, Thriller
Be the first to rate this

The second Spanish Original series from Netflix, Elite is set in Las Encinas - the best and most exclusive school in Spain for the elite. When three working class kids get admitted to the school, they get caught up in a clash between those who have and those who haven't, leading to something that ends in a murder. They then have to figure out who is behind the murder - if it's one of the elite students or one of the school's newcomers.

Elite, which will have 8 episodes for the first season, launches globally on Netflix next month, October 5, 2018.