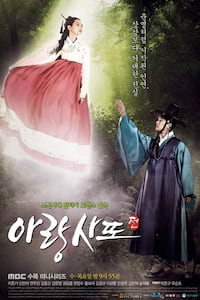 A nobleman named Kim Eun-oh (Lee Joon-gi) comes to town searching for his mother after hearing a rumor that she is staying at the village of Miryang. He has the special ability to hear, see and touch spirits, but pretends he doesn't because he gets annoyed when they pester him to help them.[cont.]

[About:]
'Arang and the Magistrate' Arang Sattojeon; also known as Tale of A-rang is a 2012 South Korean historical television drama (sageuk), starring Lee Joon-gi, Shin Min-ah and Yeon Woo-jin. The period horror-romance is based on the folklore of Arang, who died unjustly and returns as a ghost in order to reveal the circumstances surrounding her death. It aired on MBC from August 15 to October 18, 2012 on Wednesdays and Thursdays at 21:55 for 20 episodes.