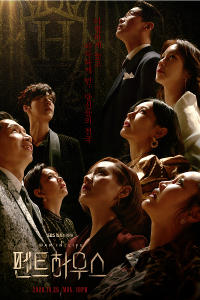 The Penthouse: War in Life is a South Korean television series starring Lee Ji-ah, Kim So-yeon, Eugene, Um Ki-joon, Park Eun-seok and Yoon Jong-hoon. The series, directed by Joo Dong-min and written by Kim Soon-ok, spins the story of real estate and education war, a desire to be number one. It depicts the solidarity and revenge of women who had no choice but to become evil women to protect themselves and their children. It premiered on SBS TV on October 26, 2020. The first look teaser was released on September 29, 2020. The teaser for Season 2 was released on January 12, 2021.

At the end of season 1, the series with 5.3 million viewers is placed at 8th rank in the Top 50 Korean television series per nationwide viewers. The series achieved the number-one position in all-channel mini-series, 21 times in a row from its first broadcast on October 26, 2020 to the last episode on January 5, 2021