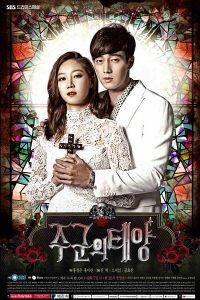 Joo Joong-won (So Ji-sub) is the cold and distant CEO of Kingdom, a conglomerate that includes a major department store and hotel. He meets the gloomy Tae Gong-shil (Gong Hyo-jin), who started seeing ghosts after an accident. Their lives take a new turn as they discover whenever Gong-shil touches Joong-won the ghosts that surround her disappear; after much pleading from Gong-shil to allow her to stay by Joong-won's side in return she must help him recover a fortune that was stolen from him during a kidnapping attempt.

[About:]
The Master's Sun is a 2013 South Korean television series starring So Ji-sub and Gong Hyo-jin. The horror-romantic comedy is written by the Hong sisters, and aired on SBS from August 7 to October 3, 2013, on Wednesdays and Thursdays at 21:55 for 17 episodes.