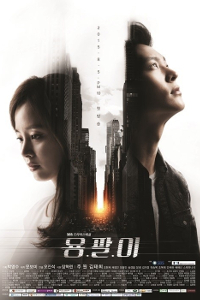 Kim Tae Hyun is a talented surgeon. Desperate for money to pay for his sister's medical bills, he adopts the code name Yong-pal and offers his medical skills to those in need of medical attention but who cannot do so publicly, dealing with criminals and corrupt plutocrats. Joining a team of corrupt physicians Kim rescues "sleeping beauty" Han Yeo Jin, a chaebol heiress, from a medically induced coma, leading to unintended consequences.

[About:]
'Yong Pal' is a 2015 South Korean drama series starring Joo Won, Kim Tae-hee, Chae Jung-an and Jo Hyun-jae. It aired on SBS from August 5 to October 1, 2015, on Wednesdays and Thursdays at 21:55 for 18 episodes. Originally slated for 16 episodes, due to the high ratings and popularity of the drama, it was extended by two episodes.

This drama reunites Kim Tae-hee and Jo Hyun-jae who first worked together in the 2004 drama Forbidden Love.