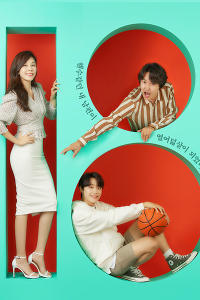 Jung Da-jung (Kim Ha-neul) and Hong Dae-young (Yoon Sang-hyun) are married and have a set of fraternal twins, Hong Shi-ah (Roh Jeong-eui) and Hong Shi-woo (Ryeoun [ko]). At first, they have a perfect happy marriage despite having children at a very young age and having financial problems. Years later, their happy marriage starts crumbling when 37-year-old Da-jung files for divorce and their 18-year-old twins start ignoring Dae-young, except for pocket money. Furthermore, Dae-young's life turns more miserable when he loses his job, after his boss promotes his nephew who has worked in the company for only 4 years, while relocating Dae-young to Busan. [cont.]

[About:]
18 Again is a South Korean television series based on the 2009 film 17 Again by Jason Filardi. Starring Kim Ha-neul, Yoon Sang-hyun and Lee Do-hyun, it aired on JTBC from September 21 to November 10, 2020, every Monday and Tuesday at 21:35 (KST). The series is available on Netflix, iQIYI and Viu with multi-language subtitles.