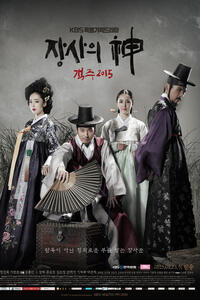 In late Joseon, a poor man named Chun Bong-sam inherits a decrepit inn and honestly works his way up to becoming a powerful merchant. As tradesmen clash against the bureaucratic powers that attempt to oppress them by rigging bad deals, Bong-sam never loses sight of his humble beginnings as a peddler even after achieving great success and eventually shapes the way that industry and business are done in his time.

[About]
The Merchant: Gaekju 2015 is a South Korean television series based on Gaekju, Kim Joo-young's ten-volume novel which was serialized in daily newspaper Seoul Shinmun from June 1979 to February 1983. It aired on KBS2 on Wednesdays and Thursdays at 21:55 for 41 episodes beginning September 23, 2015.