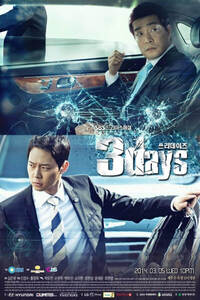 The President of South Korea goes on holiday at a private villa. In the middle of the night, three gunshots are fired, and the president goes missing. His bodyguards, led by elite agent Han Tae-kyung, have three days to find the president and escort him safely back to the Blue House.

Three Days follows the intertwining fates of those sworn to protect the president, the president himself, his political staff, and the true power players in the shadows who decide whether he lives or dies.

[About]
Three Days is a 2014 South Korean action-thriller television series starring Park Yoochun, Son Hyun-joo, Park Ha-sun, Yoon Je-moon, So Yi-hyun, Jang Hyun-sung and Choi Won-young. It aired on SBS from March 5 to May 1, 2014 on Wednesdays and Thursdays at 9:55 p.m. for 16 episodes.

Inspired by the "real time" format of American series 24, the narrative of Three Days is divided into three parts; Part 1: The Prelude, Part 2: The Showdown, and Part 3: Judgement, with each segment lasting for 72 hours.